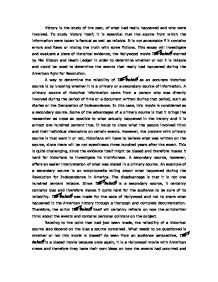 Investigate and evaluate a piece of historical evidence, the Hollywood movie The Patriot starred by Mel Gibson and Heath Ledger in order to determine whether or not it is reliable

History is the study of the past, of what had really happened and who were involved. To study history itself, it is essential that the source from which the information were taken is factual as well as reliable. It is not acceptable if it contains errors and flaws or mixing the truth with some fictions. This essay will investigate and evaluate a piece of historical evidence, the Hollywood movie The Patriot starred by Mel Gibson and Heath Ledger in order to determine whether or not it is reliable and could be used to determine the events that really had happened during the American fight for Revolution. A way to determine the reliability of The Patriot as an accurate historical source is by knowing whether it is a primary or a secondary source of information. A primary source of historical information came from a person who was directly involved during the period of time or a document written during that period, such as diaries or the Declaration of Independence. In this case, this movie is considered as a secondary source. Some of the advantages of a primary source is that it brings the researcher as close as possible to what actually happened in the history and it is almost one hundred percent true. It helps to know what the people involved think and their individual viewpoints on certain events. However, the problem with primary source is that want it or not, historians will have to believe what was written on the source, since there will be not eyewitness three hundred years after the event. This is quite challenging, since the evidence itself might be biased and therefore makes it hard for historians to investigate its truthfulness. A secondary source, however, offers an easier interpretation of what was stated in a primary source. An example of a secondary source is an encyclopedia telling about what happened during the Revolution for Independence in America. ...read more.

It was also true that he was present at the Battle of Guilford Courthouse which was a basis for the unnamed climatic battle towards the end of the movie. General Cornwallis did suffer illness at Yorktown, where he eventually and finally surrendered and sent his second-in-command Brig. General Charles O'Hara to George Washington. The movie character Maj. General Nathanael Greene was based on a real-life person of the same name as well. Although this character only appeared once throughout the whole movie, he was portrayed correctly. In the movie, General Greene was concerned about the reliability of the militia army since their poor performance in the defense of New York City in 1776 and by the way they fled the field in the Battle of Camden. Nevertheless, the discussion that took place was not accurate as it was. Even though the strategy of using the militia army as decoys were a real strategy (used in the Battle of Cowpens), General Greene was not present at the battle. Colonel Harry Burwell was told to be based the real-life Lieutenant Colonel Henry 'Lighthorse Harry' Lee. Henry Lee was in his early twenties during the war. However, different than what was portrayed in the movie, Henry was nowhere near the Battle of Camden and did not have the authority to issue the field commission of Colonel of the militia army like Burwell did to Martin. Henry Lee was also a cavalryman, but it wasn't mentioned that Burwell was such at all. The movie character of General Charles O'Hara really did exist in real-life. Just as shown in the movie and stated before, General O'Hara served as General Cornwallis' second-in-command during the Surrender of Yorktown on October 19 1781. Nevertheless, in real life he would still be in the north until October 1780, so he would never be present at the Battle of Camden. However, it is true that he was present during the Battle of Guilford Courthouse where in the movie he was wounded during the attack. ...read more.

Another and the last aspect in determining the reliability is the time of which the events took place. From the investigation and analysis undertaken, the year of each events mentioned or shown in the movie are thoroughly correct. However, the movie itself only comprised of one-fifth of the actual fight for Independence. Referring back to this timeline, it could be seen that there is a balance between the events known to be precise and the events found in the movie. Watching this movie, however, would be like entering a cinema movie when it had already begun. The same applies to this because the start of the movie is already halfway through the revolution. This movie only contains an ongoing fraction of the whole chain of events. However, if seen from the time the events took place, The Patriot is very reliable and accurate. From all the evidences found in determining whether or not The Patriot is a reliable historical source, it has come to a conclusion that it is not. Even if it does, only parts of it are accurate and therefore could not contribute to the accurate study of history as it could mess and mix the facts with fiction. There were a few events that really did exist, but almost all parts of the movie are joined with made-up events to add the spice in the action. However, the filmmakers did try to make the movie as close as it was to the real events of the American Revolution, basing the characters on real-life people and bringing the scenes to life by breathtaking special effects and costumes. What was lacking was probably only the essence of the reliability of its facts and the truthfulness of all the events found inside the movie. Therefore, although providing a fantastic movie with great acting and special effects, it is concluded that The Patriot is not an accurate historical source and could not be used as a reliable documentation on the history of the Revolutionary War for Independence of America. ...read more.

This essay is based upon spectacularly good factual research, but is weakened by a rather naive and limited idea of what constitutes "historical accuracy". It is good on facts, but weak on theories about facts, and this leads the essayist to limited and inaccurate conclusions despite their obvious intelligence and the depth of their research.

Some further research into critical debates about realism and bias from within the discipline of History itself would compensate for this flaw.

Still, an impressive piece of work for A level, demonstrating a good mixture of personal intelligence and researched knowledge that would ordinarily be expected from early university work, despite the questionable way it chooses to define accuracy and inaccuracy,