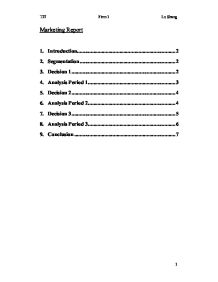 Marketing Report 1. Introduction 2 2. Segmentation 2 3. Decision 1 2 4. Analysis Period 1 3 5. Decision 2 4 6. Analysis Period 2 4 7. Decision 3 5 8. Analysis Period 3 6 9. Conclusion 7 1. Introduction This article is about the business strategy to a new product V-box (voice recognition device) and the successes and failures of the strategy. V-box is a device to recognize human-being's spoken language and translate it into computer commands, This section looks at the downfalls V-Box has had to face and then leads onto the strategic action to counteract these negative issues. It comes to 3 decisions with 3 analyses about it, and ends up with a conclusion. 2. Segmentation The chosen segmentation is modern students, home users and concerned parents. The reason of choosing those segments was because it is close to student's life and it could be easier to understand what they want and need. Modern students may use VRD very frequency. For example they use it as educational technology, like communicate with family and friends, do their assignments in the school campus. Home users probability use VRD for online shopping or communicate with others. The last one is the concerned parent. They usually use it for themselves or their children to get interest in and experience with it early. ...read more.

For example, the total units sold in both channel 1 and 2 had the largest proportion of shares in the competition. That means a bit because the bigger of the shares in the competition, the better position the company is on. Sometimes the share indicates the future, which is more important than the present profit. 5. Decision 2 After absorbed last time experiences, this time was quite easier to target the market. In order to cut down some expenses, there were 10 sales reps has been fired from channel 1 and employed 3 more for channel 2. Because the sales situation in channel 1 was not like what's expected, cutting down the expenditure from this channel was quite necessary. Furthermore, decreasing production order quantity is also very important, so there was a reduction in both channel 1 and 2. In addition, the charge for customer service was slight increased, because compared with the others competitors, they all set this number very high, therefore, maybe this figure was a key factor for being successful in channel 1. What is more, according to the last period average customer preferences, it gives the average number of the segmentations. In order to make the VRD more suitable and attractive for the customers, the method for measuring that number was changed from adding the number which the firm targeted and dividing it by 3. ...read more.

The tending is to more and more contribution. From the production report, could see the reason of the tending that just discuss in last paragraph. For the period one, more order than production, and more production than sold units. It could be caused by poor management on getting order, etc. Period improved this situation. Period 3 is perfect combination - order quantity equal to production, and equal to sold units. Nothing is wasted, and the sold units are more than period one and period two. 9. Conclusion Overall, the firm was not performed too badly. Although it made a loss at beginning, after adjusting the number, the firm was made profits. The changing in period two is the key to success. By looking at the graph carefully, sold units in period 2 is less than the ones in period one. This might because of strictly asking for the proof that the entire ordered unit will be really bought after production. This method might make the order amount less, actually it is, but the waste in production is more avoided. Now it can tell that the decision made in period 2 is right, but at that time, when the order amount largely decreased, managers must be facing big pressure to insist the changing. This tells that the firm should focus on future and real profit, rather than un-reliable present number, no matter how attractive they seem to be. T27 Firm 1 Lu Shang 1 ...read more.