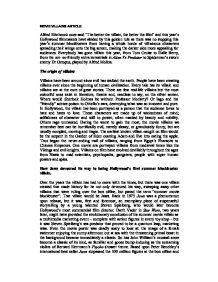 MOVIE VILLAINS ARTICLE Alfred Hitchcock once said "The better the villain, the better the film" and this year's Hollywood filmmakers have abided by this golden rule as there was no stopping this year's summer blockbusters from having a whole horde of villainous characters spreading their wings onto the big screen, making the darker side more appealing for audiences. Everybody has gone villain this year, from Tom Cruise to Halle Berry, from the not- so-friendly extra terrestrials in Alien Vs Predator to Spiderman's sworn enemy Dr Octopus, played by Alfred Molina. The origin of villains Villains have been around since evil has walked the earth. People have been creating villains ever since the beginning of human civilization. Every tale has its villain and villains are at the core of great stories. There are few real-life villains but the most colourful ones exist in literature, theatre and, needless to say, on the silver screen. Where would Sherlock Holmes be without Professor Moriarty? Or Iago and his "friendly" advice poison to Othello's ears, destroying what was so innocent and pure. In Hollywood, the villain has been portrayed as a person that the audience loves to hate and hates to love. These characters are made up of wickedness of mind; selfishness of character and will to power, often masked by beauty and nobility. Others rage unmasked. Daring the worst to gain the most, the movie villains we remember best can be horrifically evil, merely sleazy, or grandiosely funny, but are usually complex, moving and tragic. The earliest known villain caught on film would be the serpent in the Garden of Eden coaxing Adam and Eve into eating the apple. Thus began the never-ending trail of villains, ranging from Egypt's Pharaohs to Chinese Emperors. One movie era portrayed villains from medieval times like the Vikings and evil knights. Villains on film have evolved devilishly throughout the ages from Nazis to mad scientists, psychopaths, gangsters, people with super human powers and spies. ...read more.

The Science Fiction villain treatment It looks like in this summer's villain marathon we're not only witnessing monsters, werewolves, vampires and vixens in our local cinemas but it is also science-fiction's turn to be given the villain treatment and big time with two of the coolest creatures in Sci- Fi history finally coming together in Alien Vs Predator. Dubbed the summer franchise for the MTV Generation and hot on the success of last year's slasher smackdown Freddy vs Jason, this film is this year's most anticipated monster's brawl-as-high-concept movie and, for once, the tagline of the publicity poster is right "Whoever wins we lose"!! Sci-Fi geeks have raised up high their antennas thanks to this franchise collision as it will spawn a successful video game and collector's comic. Directed by Paul WS Anderson the plot centers around the theory that claims the pyramids in Egypt were ancient spaceships but there's a new twist to the myth as the ancient pyramid where the action is set is buried in the Antarctic permafrost. One thing's for sure... there are more than enough fans of both the Alien and Predator franchises to guarantee its success. After last summer's August heat wave that contributed to the Terminator blasting out the local box office, the Robot dial has yet again been tuned into the villainous frequency, only this time it is very personal as the battle is set against Will Smith, aka as the Fresh Prince of Bel Air, in I, Robot. Based on the book (also entitled I, Robot) by sci-fi writer Isaac Asimov its theme has become now commonplace: the idea of computers and machines going berserk and taking over the world. There are however, some impressive special effects, such as the scene of the several thousand new robots lined up in a warehouse that recalls a Nazi Nuremberg rally. But what stands out in the movie is the villainous Vicki Computer that bears a resemblance to 2001's HAL, and the Robot character Sonny, an advanced robot of considerable intelligence with the innocently inquiring mind of Star Trek's Mr. ...read more.

Based on the dark horse comic series the film follows the adventures of a wisecracking demon (Ron Perlman) who works for an ultra secret division of the FBI that deals with supernatural threats. In comparison with other main stream comic book villains gearing up to score at the box office, this summer there is a sense of exclusivity and I dare say elitism to Hell Boy. When you watch the movie you get the feeling that the director is so obsessed with Hell Boy that he forgot the one element that would really make this movie soar: allowing the movie fan who is unfamiliar with the comic book to look behind the curtain and find a welcoming character. The problem with this movie is that it was done by a die-hard Hell Boy fan for fans of the comic book hero character and one thing's for sure the way this movie was made it won't bring any new Hell Boy fans because the concepts, characters and conflicts are too bizarre, too cerebral and too engrossed in their own mythology for any casual movie goers to embrace. Nevertheless for fans of the supernatural it will come as a cross between Men in Back and X-Men with one of the most original, endearing and plain super human lead characters in years. Leading this summer's villain battle is Tom Cruise who for the first is playing a bad guy in Michael Mann's adult thriller Collateral. The Cruiser puts aside his Samurai armour and plays Vincent, a slicker-than-thou assassin who takes LA Taxi driver Max, played by Jamie Foxx, hostage over the course of a single night, during which he has five hits to carry out, while Mark Ruffalo's dogged cop tries to stop him. Collateral promises dead-eye action and gritty visuals but there are some who doubt whether the great movie-going public will accept Tom Cruise as a bad guy in Collateral but nevertheless it will still be a joy to watch Cruise finally unleash his id, as on screen he has always come close to being the psychotic villain. ...read more.