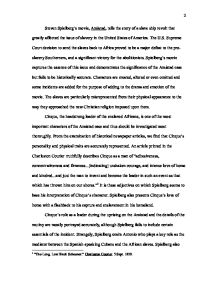 Steven Spielberg's movie, Amistad, tells the story of a slave ship revolt that greatly affected the issue of slavery in the United States of America. The U.S. Supreme Court decision to send the slaves back to Africa proved to be a major defeat to the pro-slavery Southerners, and a significant victory for the abolitionists. Spielberg's movie captures the essence of this issue and demonstrates the significance of the Amistad case but fails to be historically accurate. Characters are created, altered or even omitted and some incidents are added for the purpose of adding to the drama and emotion of the movie. The slaves are particularly misrepresented from their physical appearance to the way they approached the new Christian religion imposed upon them. Cinque, the headstrong leader of the enslaved Africans, is one of the most important characters of the Amistad case and thus should be investigated most thoroughly. From the examination of historical newspaper articles, we find that Cinque's personality and physical traits are accurately represented. An article printed in the Charleston Courier truthfully describes Cinque as a man of "adhesiveness, concentrativeness and firmness...[indicating] unshaken courage, and intense love of home and kindred...and just the man to invent ...read more.

Although Cinque is the main character of the movie, Spielberg noticeably doesn't give enough credit to the rest of the Africans. The other Amistad Africans seem to be overshadowed by Cinque's evident leader role, although many of them could be equally effective leaders. In the movie, Cinque explains that he doesn't feel he deserves to lead his people and that he is only well respected because he inadvertently killed a lion that was threatening his town. "I'm not a big man, just a lucky one,"3 Cinque explains to Joadson. It should be noticed that important colleagues of Cinque are not even mentioned in the movie, such as Kale, "the boy, who has been in correspondence with Mr. John Quincy Adams."4 Not only has Spielberg neglected to mention certain characters, he has also created a fictional character of his own. Theodore Joadson, played by Morgan Freeman, has never been mentioned in historical accounts of the Amistad mutiny though he plays an important role in the movie. The most significant character alteration Spielberg has made is that of Attorney Roger S. ...read more.

"Send us home. Give us Missionary. We tell Mendi people Americans spoke truth...We tell them there is one god. You must worship him,"8 Kale writes to Adams. Finally, certain factual aspects of the court cases are also faulty. The fundamental questions arising from the court case were all presented accurately, but a major treaty between Spain and Great Britain was not mentioned in the movie. This treaty stated, "the slave trade is prohibited to the subjects of each."9 In fact, there was limited focus on the communication between Secretary of State Forsyth and the prepubescent Queen Isabella II of Spain in Spielberg's adaptation of the Amistad issue. Generally, Spielberg's adaptation of the Amistad Mutiny and the subsequent controversial court cases were factually accurate. Certain representations of characters contradict evidence found in historical documents, but they serve to enhance the sympathy for the Africans. Likewise, Spielberg's interpretation of religion and the emotional atmosphere of Connecticut oppose factual evidence but increase audience response to the atrocities of slavery by making the movie more dramatic. Nevertheless, Spielberg's movie Amistad, achieves its purpose of encouraging popular interest in the history of slavery in America. ...read more.