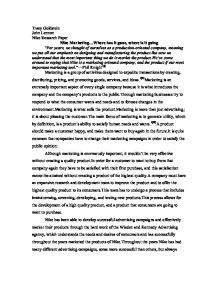 Nike Marketing&amp;#133;Where has it gone, where is it going?

Tracy Goldstein John Lennon Nike Research Paper Nike Marketing...Where has it gone, where is it going "For years, we thought of ourselves as a production-oriented company, meaning we put all our emphasis on designing and manufacturing the product.But now we understand that the most important thing we do is market the product.We've come around to saying that Nike is a marketing oriented company, and the product if our most important marketing tool."-Phil Knight1[i] Marketing is a group of activities designed to expedite transactions by creating, distributing, pricing, and promoting goods, services, and ideas.1[ii]Marketing is an extremely important aspect of every single company because it is what introduces the company and the company's products to the public.Through marketing businesses try to respond to what the consumer wants and needs and to foresee changes in the environment.Marketing is what sells the product.Marketing is more than just advertising; it is about pleasing the customer.The main focus of marketing is to generate utility, which by definition, is a product's ability to satisfy human needs and wants.1[iii]A product should make a customer happy, and make them want to buy again in the future.It is quite common that companies have to change their marketing campaigns in order to satisfy the public opinion. Although marketing is enormously important, it wouldn't be very effective without creating a quality product.In order for a customer to want to buy from that company again they have to be satisfied with their first purchase, and this satisfaction cannot be attained ...read more.

he was able to play so great in these shoes maybe I can to, is the idea, which Nike was working off of.Using professional athletes in their advertising campaigns was both efficient and effective for Nike.Phil Knight in an interview in the Harvard Business Review quoted "It saves us a lot of time.Sports are at the heart of American culture, so a lot of emotion already exists around it.Emotions are always hard to explain, but there's something inspirational about watching athletes push the limits of performance.You can't explain much in 60 seconds, but when you show Michael Jordan, you don't have to."1[iv] Sports' marketing was a major part of Nike's advertising campaign up until recently.Although Michael Jordan was the major spokesperson for Nike, he was not the only athlete that Nike used to sell their products.Nike has included women athletes such as Monica Seles and Mia Hamm.Both us these women represented strength and were positive role models for young girls.Nike used this to market their products to girls and to inspire woman through successful women athletes.Nike has also used other men in their campaigns; a few are Michael Johnson, Pete Sampras, John McEnroe, and Andre Agassi.These male athletes were positive role models and athletes in which people aspired to be. When Michael Jordan retired in January of 1999 Nike needed to find a new hero, a new athlete as great as Michael Jordan and as widely accepted for children to aspire to be.Unfortunately the professional sports market no longer boasted any Michael Jordan's. ...read more.

such as basketball moves, soccer dribbling, BMX biking, double-Dutch break-dancing and other extreme and individual events.Nike's Play campaign stresses individual achievement and encourages everyone to participate.Another new campaign that Nike is currently running is its "Boing" advertisements.These are for Nike's Shox sneakers and Wieden and Kennedy have coined a term to describe the experience that these sneakers offer for you.Displays for Shox at sneaker stores, allow customers to hear the Boing sound. The public has responded positively to Nike's new advertising campaigns and the difference in their focus.Many people have attended the Nike Play festivals in support of the new Nike campaign, which is based around individualism and individual sports.Many citizens have recently questioned some of what professional sports have come to stand for.Some people feel that these teams are no longer about promoting athleticism, but rather about making the most money.In addition people feel that these professional athletes are no longer role models for the countries youth and are not people to aspire to be.With this switch in public opinion more emphasis has been placed on the individual and on the simplicity of athleticism. In the near future, Nike will more than likely continue on with its trend of supporting the individual and athleticism as opposed to revolving its entire campaign around professional athletes.This is because of a changing view in society and because more emphasis has been placed on the individual.Successful marketing advertises public opinion, and that is what Nike is doing through their new marketing strategies. ...read more.