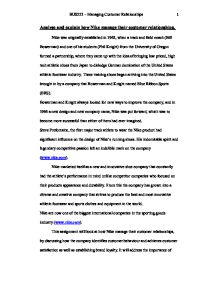 Analyse and explain how Nike manage their customer relationships.

Analyse and explain how Nike manage their customer relationships. Nike was originally established in 1962, when a track and field coach (Bill Bowerman) and one of his students (Phil Knight) from the University of Oregon formed a partnership, where they came up with the idea of bringing low priced, high tech athletic shoes from Japan to dislodge German domination of the United States athletic footwear industry. These training shoes began arriving into the United States brought in by a company that Bowerman and Knight named Blue Ribbon Sports (BRS). Bowerman and Knight always looked for new ways to improve the company, and in 1966 a new design and new company name, Nike was put forward, which was to become more successful than either of them had ever imagined. Steve Prefontaine, the first major track athlete to wear the Nike product had significant influence on the design of Nike's running shoes. His indomitable spirit and legendary competitive passion left an indelible mark on the company (www.nike.com). Nike marketed itself as a new and innovative shoe company that constantly had the athlete's performance in mind unlike competitor companies who focused on their products appearance and durability. From this the company has grown into a diverse and creative company that strives to produce the best and most innovative athletic footwear and sports clothes and equipment in the world. ...read more.

But many of today's professional athletes that are currently in the public eye can no longer be considered heroes. Many of them have had problems with the law; there have also been several drug and alcohol related problems, along with numerous arrests, that have created a lot of bad press for professional athletes as a whole. As a result children no longer seek to be like these sports stars, they have the desire to be their own person and society stresses the importance of the individual. Nike used to sponsor the world famous basketball player Michael Jordan, and this sponsorship became huge as they then went on to include his name in their brand and endorsed him in several of their products. When Michael retired from playing basketball, Nike seeked to find a replacement, a new athlete as great as Michael Jordan and as widely accepted for children to aspire to be. Unfortunately the professional sports market no longer boasted any Michael Jordan's, and the extreme bad press that sportsmen and women had received called for Nike to alter their marketing campaigns. Not only have young people lost some of the respect that they hold for professional athletes because of their behavior, some young people are turned off by the contract wars that go on between athletes and team managers. ...read more.

"Today, two factors are reported as much more prominent. First, the impact of new technology is perceived as today's strongest change factor in the market. Next comes the customer, most significantly in terms of the need for increasing customer focus, backed by the perceived presence of increasingly demanding customers." (Foss 2002 p.26) Nike's increase in customer focus is shown by one of its latest campaigns, Nike ID allowing customers to personalise their trainers. This campaign has been set up on the Internet, which allows for easy access, and can reach customers who prefer to buy online rather than having to travel down to shops. This is widening the number of environments in which customer contact takes place at Nike. Marketing at Nike has yet further been enhanced as internal marketing has been encouraged, improving both internal morale at Nike as well as overall company efficiency. In the near future, Nike will more than likely continue on with its trend of supporting the individual and athleticism as opposed to revolving its entire campaign around professional athletes. This is because of a changing view in society and because more emphasis has been placed on the individual. Successful marketing advertises public opinion, and that is what Nike is doing through their new marketing strategies. Nike's marketing campaign reflects the popular preferences in society and the stress that society is putting on individual uniqueness. ...read more.