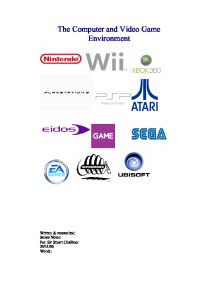 The Computer and Video Game Environment

The Computer and Video Game Environment Written & researched: James Noton For: Sir Stuart Challinor 24/11/06 Words: CONTENTS PAGE 1. Executive Summary 2. Intentions of the Report 3. The Marketing Environment 4. The Micro-Environment 4.1 Suppliers 4.2 Customers 4.3 Competitors 5. Situation Review 6. The European Video Game Industry vs. The US Video Game Industry 7. The Macro-Environment 7.1 SWOT Analysis 7.2 Pestle Analysis 7.3 Porter's Five Forces Analysis 8. Conclusions and Recommendations Summary of Abbreviations Research Portfolio 1. EXECUTIVE SUMMARY. - New products make the market ever changing. But profits are decreasing for specialists and generalists. This is mainly due to supermarkets and online specialists. - Overall penetration by households remains fairly static at 25-30%, implying that manufacturers are simply selling newer consoles to existing enthusiasts. - Nintendo's Wii attempts to bring casual gamers and families back into the market. 2.0- INTENTIONS OF THE REPORT. This report measures the extent to which changes in distribution channels have taken place and concentrates on the continuing issue of how different types of retailers' roles will evolve in this market as technology continues to develop. 3.0- THE MARKETING ENVIRONMENT. * Video and computer games is a relatively new market in retailing terms. However the pace of change is such that existing retail formats may have limited endurance, as platforms progress and the means of accessing and using games change. * Next-generation consoles look set to deliver new growth to the market. The question is, however, will they attract new users? Manufacturers have successfully sold more and more machines into the market, but household penetration has been largely unchanged at 25-30% for some time now. * In 2005, the video games sector increased by 15% in current value terms compared to 2004. * The improvement of modern technologies renders the video games market full of life. Manufacturers aim to continue to attract new consumers from all age groups and sociocultural backgrounds. ...read more.

Throughout the history of Japanese game design, many developers have seen fit to remain mostly anonymous, even using pseudonyms to a large degree in video game credits. * The division in labour for video game development is far different. For example, Japanese game design teams had a devoted designer, (which they called a "director") far earlier than American design teams adopted the practice. Yet it was clear that even with this centralized design process level designers and character designers were given a lot of flexibility to work within their boundaries as much as possible. For example, almost every level in Super Mario Bros. 3 has new gameplay concepts within it. * Additionally Japanese game designers throughout history generally had far more people working on a particular game then a comparable western design team. For example, Mortal Kombat, an American title, was developed by four people: a programmer, an artist, a musician, and a background artist. Street Fighter 2, a comparable Japanese title, had almost one artist working on every character in the game, plus two programmers, plus a musician with the result being a team of twenty or more people. 7.0 THE MACRO ENVIRONMENT 7.1 SWOT Analysis Strengths * There is an established base of consoles in many households. Gaming has widespread appeal as a leisure activity. Up to 30% of households have at least one form of console and an increasing number have hardware for more than one platform. * There is continuously lots of new product development to fuel the market. The development pipeline of new games for existing hardware and new hardware is strong. New developments, such as Wii, look likely to appeal to existing gamers but also to attract less active gamers into the market. * The products relatively short lifecycles prolong consumer attention. Gamers have demonstrated that they are more than willing to upgrade to the latest technological advances. ...read more.

As this interviewee stated each cycle is bigger but appears to be shorter than the previous one. 7.3 Porter's Five Forces * Supplier Power * It is easy for hardware suppliers to drive up prices since there are only three main players. Games publishers however have less power since outlets will have greater choice. * Buyer Power * There are a number of buyers but each individual buyer is not important to your business. The cost of a few of them switching from your products and services to those of someone else, would not be too big. So they shouldn't be able to dictate terms to you. * Competitive Rivalry * There are many competitors In the market that offer equally attractive products. * Threat of Substitution * There are lots of different buying options when choosing to purchase games or hardware. So substitution is easy and viable. * Threat of New Entry * It would cost a lot of time and money to enter the market and compete effectively. There are strong and durable barriers to entry, so retailers can preserve a favourable position and take fair advantage of it. 8.0 Conclusions and Recommendations The video games sector should continue to see healthy growth over future years. But historically, the games industry has always been very bad at promoting itself to people who aren't already interested. If I wasn't into games I wouldn't know where to go to find out about them. So unless new platforms attract new users, the market is not fulfilling its full potential. I think manufacturers should broaden the user base and identify receptive sub-groups for future targeting and what retailers can do to reach them. It looks like innovation therefore is the only way to go for publishers and retailers to remain on top of the game. In order to cope with continuously changing and evolving trends, publishers need to combine their awareness of latest consumer trends and the use of the latest technologies to create truly innovative games while satisfying old consumers/fans by updating classics. ?? ?? ?? ?? ...read more.