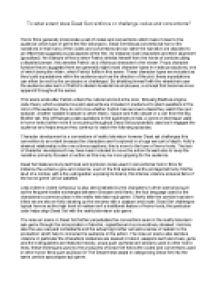 To what extent does &quot;Dead Set&quot; reinforce or challenge codes and conventions?

﻿To what extent does Dead Set reinforce or challenge codes and conventions? Horror films generally incorporate a set of codes and conventions which make it clear to the audience which type of genre the film belongs to. Dead Set follows conventional horror film narratives in that many of the codes and conventions shown within the narrative are depicted to an effect that suggests crucial aspects of the film, for instance main characters and their alignment (good/bad). An example of this is when Patrick shields himself from the horde of zombies using a disabled person, this denotes Patrick as a villainous character to the viewer. Props character function theory suggests there are generally eight broad character types in media productions, one of which being the villain, which Patrick fulfils in this scene. These character types are included as they build expectations within the audience such as the direction of the plot, these expectations can either be met by the producers or challenged. By shielding himself with the wheelchair user the audience also learn of Patrick's disdain towards his employees, a concept that becomes more apparent throughout the series. ...read more.

Dead Set features many technical and symbolic codes used in conventional horror films for instance the extreme gore and violence; even in the first episode as the protagonist Kelly hits the skull of a zombie with a fire extinguisher exposing its brains, this intense violence ensures fans of the horror genre will be satisfied. Less extreme violent behaviour is also demonstrated by the characters in other scenarios such as the frequent hostile exchanges between Grayson and Marky, the foul language used by the characters is common place in the reality television sub-genre. Shortly after the zombie has been killed we are shown Kelly clearing up the remains with a dustpan and brush, Dead Set challenges typical horrors as the high level of realism isn't a traditional feature of horror texts, this particular code helps align Dead Set with the reality television sub-genre. The mise en scene in Dead Set further perpetuates the conventions seen in the reality television sub-genre through the incorporation of alcohol, cigarettes and a provocatively dressed Veronica also the use real past contestants and the actual big brother set add a sense of realism to the production which help to immerse the audience in the action. ...read more.

The polysemic signs within the narrative aren't conventional in horror or reality television however they are featured numerous times throughout Dead Set, an example of this is during eviction night, Joplin describes the audience as ?animals? however they are actually zombies, this is Brooker comparing BB audience to the brain dead zombies, this satirising of society contrasts typical horror texts. Non-diegetic music is also incorporated, during the first epsiode it epitomises the dim situation of the characters, this may have been included as it points the audience to the bleakness of the narrative. The contrapuntal music used in the final episode sounds calming and somewhat optimistic however it contrasts greatly to the images on screen, the zombies devouring one another. This philosophical music may have been included to emphasise the sub-textual meanings to help the viewer see past the literal signs, for example the zombie looking at Kelly on the television, the inclusion of the music makes the satire more evident to the audience in this instance it isn't just the zombie watching Kelly, it is Brooker satirising the reality television audience more specifically those who watch Big Brother. ...read more.