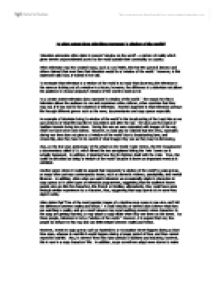 To what extent does television represent 'a window of the world?'

In addition, it depicted how the fire fighters dealt with the crisis. Thus, this could be described as being 'a window of the world' because it shown an important event as it unfolded. Another genre where it could be argued that represents 'a window of the world' is soap operas, as soaps often portrays contemporary issues, such as domestic violence, paedophilia, and mental illnesses. In addition, often when we watch television we occasionally relate to characters in soap operas or in other types of television programmes, suggesting that the audience knows people who are like the characters, like friends or families, alternatively, they could have gone through similar experiences to a character, thus, suggesting that soap operas do in some way depict reality. Allen states that "One of the most popular images of a daytime soap opera is one who can't tell the difference between reality and fiction." A small minority of viewers does believe what they are watching is reality, and as a result viewers may send wedding ...read more.