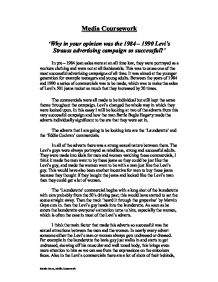 'Why in your opinion was the 1984 - 1990 Levi's Strauss advertising campaign so successful?'

Media Coursework 'Why in your opinion was the 1984 - 1990 Levi's Strauss advertising campaign so successful?' In pre - 1984 jean sales were at an all time low, they were portrayed as a workers clothing and were not at all fashionable. This was to cause one of the most successful advertising campaigns of all time. It was aimed at the younger generation for example teenagers and young adults. Between the years of 1984 and 1990 a series of commercials was to be made, which was to make the sales of Levi's 501 jeans rocket so much that they increased by 20 times. The commercials were all made to be individual but still kept the same theme throughout the campaign. Levi's changed the whole way in which they were looked upon. In this essay I will be looking at two of the adverts from this very successful campaign and how the man Bartle Bogle Hegarty made the adverts individually significant to the era that they were set in. ...read more.

Then the track 'heard it through the grapevine' by Marvin Gaye cuts in. then the Levi's guy heads into the launderette. As soon as he enters the launderette everyone's attention turns to him, especially the women, which is often the case in most of the Levi's adverts. I think the main factor that made this adverts so successful was the sexual attractions between the men and the women. In nearly every advert someone either the Levi's man or women always gets undressed or dressed. For example in the launderette the levis guy just walks in and starts to get undressed, showing off his muscular and well toned body, this brings even more attention to him as we can see from the expressions on the onlookers faces. Also in the Levi's commercials there are a lot of shots of their behinds, this also ads to the sexual tension that is being built up throughout the ads. ...read more.

Even though she has so many expensive clothes, she just wears a pair of Levi's. I think this shows how precious Levi's jeans really were. I think there are two main messages that have come from this advert, the first is that women can wear levis as well as men and also they can be worn as a smart/casual trouser. After 1990 Levi's jeans had become so popular that their sales had rocketed. The Levi's commercials transformed the publics perception from working clothes to an everyday casual fashion, for both men and women particularly the younger generation. Today there are many brand names of jeans. However Levi continue to reinvent their jeans, with various colours and styles, which they successfully advertise keeping Levi a competitive name in today's market. In conclusion, I think that the Levi's Strauss advertising campaign proved to be very successful because they turned their company into a household name, and these days is the one item of clothing that is guaranteed to be in everyone's wardrobe. Martin Green, Media Coursework ...read more.