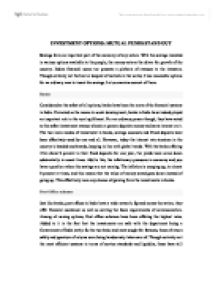 INVESTMENT OPTIONS: MUTUAL FUNDS STAND OUT Savings form an important part of the economy of any nation. With the savings invested in various options available to the people, the money acts as the driver for growth of the country. Indian financial scene too presents a plethora of avenues to the investors. Though certainly not the best or deepest of markets in the world, it has reasonable options for an ordinary man to invest his savings. Let us examine several of them: Banks Considered as the safest of all options, banks have been the roots of the financial systems in India. Promoted as the means to social development, banks in India have indeed played an important role in the rural upliftment. For an ordinary person though, they have acted as the safest investment avenue wherein a person deposits money and earns interest on it. The two main modes of investment in banks, savings accounts and Fixed deposits have been effectively used by one and all. However, today the interest rate structure in the country is headed southwards, keeping in line with global trends. With the banks offering little above 9 percent in their fixed deposits for one year, the yields have come down substantially in recent times. Add to this, the inflationary pressures in economy and you have a position where the savings are not earning. The inflation is creeping up, to almost 8 percent at times, and this means that the value of money saved goes down instead of going up. This effectively mars any chance of gaining from the investments in banks. Post Office schemes Just like banks, post offices in India have a wide network. Spread across the nation, they offer financial assistance as well as serving the basic requirements of communication. Among all saving options, Post office schemes have been offering the highest rates. Added to it is the fact that the investments are safe with the department being a Government of India entity. ...read more.

470 bn. in March 1993 and the figure had a three times higher performance by April 2004. It rose as high as Rs. 1,540bn. The net asset value (NAV) of mutual funds in India declined when stock prices started falling in the year 1992. Those days, the market regulations did not allow portfolio shifts into alternative investments. There were rather no choice apart from holding the cash or to further continue investing in shares. One more thing to be noted, since only closed-end funds were floated in the market, the investors disinvested by selling at a loss in the secondary market. The performance of mutual funds in India suffered qualitatively. The 1992 stock market scandal, the losses by disinvestments and of course the lack of transparent rules in the whereabout rocked confidence among the investors. Partly owing to a relatively weak stock market performance, mutual funds have not yet recovered, with funds trading at an average discount of 1020 percent of their net asset value. The supervisory authority adopted a set of measures to create a transparent and competitve environment in mutual funds. Some of them were like relaxing investment restrictions into the market, introduction of open-ended funds, and paving the gateway for mutual funds to launch pension schemes. The measure was taken to make mutual funds the key instrument for long-term saving. The more the variety offered, the quantitative will be investors. At last to mention, as long as mutual fund companies are performing with lower risks and higher profitability within a short span of time, more and more people will be inclined to invest until and unless they are fully educated with the dos and donts of mutual funds. Future of Mutual Funds in India By December 2004, Indian mutual fund industry reached Rs 1,50,537 crore. It is estimated that by 2010 March-end, the total assets of all scheduled commercial banks should be Rs 40,90,000 crore. ...read more.

NAV is required to be disclosed by the mutual funds on a regular basis - daily or weekly - depending on the type of scheme. What are the different types of mutual fund schemes? Schemes according to Maturity Period: A mutual fund scheme can be classified into open-ended scheme or close-ended scheme depending on its maturity period. Open-ended Fund/ Scheme An open-ended fund or scheme is one that is available for subscription and repurchase on a continuous basis. These schemes do not have a fixed maturity period. Investors can conveniently buy and sell units at Net Asset Value (NAV) related prices which are declared on a daily basis. The key feature of open-end schemes is liquidity. Close-ended Fund/ Scheme A close-ended fund or scheme has a stipulated maturity period e.g. 5-7 years. The fund is open for subscription only during a specified period at the time of launch of the scheme. Investors can invest in the scheme at the time of the initial public issue and thereafter they can buy or sell the units of the scheme on the stock exchanges where the units are listed. In order to provide an exit route to the investors, some close-ended funds give an option of selling back the units to the mutual fund through periodic repurchase at NAV related prices. SEBI Regulations stipulate that at least one of the two exit routes is provided to the investor i.e. either repurchase facility or through listing on stock exchanges. These mutual funds schemes disclose NAV generally on weekly basis. Schemes according to Investment Objective: A scheme can also be classified as growth scheme, income scheme, or balanced scheme considering its investment objective. Such schemes may be open-ended or close-ended schemes as described earlier. Such schemes may be classified mainly as follows: Growth / Equity Oriented Scheme The aim of growth funds is to provide capital appreciation over the medium to long- term. Such schemes normally invest a major part of their corpus in equities. Such funds have comparatively high risks. These schemes provide different options to the investors like dividend option, capital appreciation, etc. ...read more.