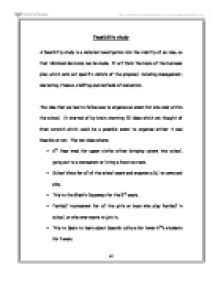 Feasibility study A feasibility study is a detailed investigation into the viability of an idea, so that informed decisions can be made. It will form the basis of the business plan, which sets out specific details of the proposal, including management, marketing, finance, staffing and methods of evaluation. The idea that we had to follow was to organise an event for who ever within the school. It started of by brain storming 10 ideas which we thought of from scratch which could be a possible event to organise wither it was feasible or not. The ten ideas where: * 6th Year meal for upper sixths either bringing caters into school, going out to a restaurant or hiring a function room. * School disco for all of the school years and organise a DJ to come and play. * Trip to the Giant's Causeway for the 5th years. * Football tournament for all the girls or boys who play football in school, or who ever wants to join in. * Trip to Spain to learn about Spanish culture for lower 6th's students for 1 week. * Talent show open to all years in the school for singing or peoples special attributes * Go-karting in Eddie Irvine sports in Bangor for upper 6th sixth * Fashion show for all years of school and try to let them model clothes for shops. ...read more.

On the other side of things it would be a very exciting event to manage and organise and I think it would be thoroughly enjoyed. Take a group hiking up the Mourne mountains for a day. This would be good exercise and would be quite interesting along with great views over County Down and Newcastle. It may not also be a popular event as there is walking involved. A Sponsored walk from Holywood to Crawfordsburn Country Park for charity and open to anyone to take part. This event costs nothing and at the end of the day a charity benefits from the money raised from everyone and it is along a form of a non tiring exercise. From the 10 ideas which he have talked about and their strengths and weaknesses we had then to break this down into 3 ideas which we though seemed the most popular when talked about. The 3 we chose where the 6th Year meal, sponsored walk and go-karting. These then had to be put through a SWOT analysis (strengths, weakness, opportunities and threats). We chose these 3 choices because we thought they seemed the most feasible and easy to organise. 1. 6th Year meal 2. Sponsored walk 3. Go-Karting When the SWOT analysis was done we had to then as a group chose the one which we where most wanting to do but also the most see able for working out in the end. ...read more.

4. We asked how many people would prefer jest a meal or entrainment after? This is a hard choice for us to make as we got a draw of 50% each if to get entertainment or not for after the meal. 5. How much they will be willing to pay for ticket? From this pie we are now aware that the customers will be willing to pay between �26-�30 per ticket for this event to be held as we got a vote of this price of 46%. We also phoned up 3 outside caters which one of 3 gives us a quote and the other two said they would send emails and never bother to. So we have one quotes on caters. If we where hiring in caters the places where they could potentially go are the Library, Assembly Hall Careers Room or the Canteen. We also thought of additional ideas which we thought we could have along with some of the options we have chosen. We though of having a guest speaker at the meal like a teacher which has left and was a popular teacher with the other teachers he/she worked along with and the pupils. We also had the idea of a charity raffle and all the money raised would go to a good cause. Also we were thinking of a reunion dinner where we asked former pupils which left in the same year as us but we stayed on to come to a dinner with us. ?? ?? ?? ?? 40 ...read more.