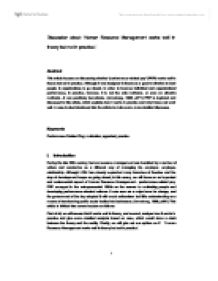 Discussion about 'Human Resource Management works well in theory but not in practice.'

Discussion about 'Human Resource Management works well in theory but not in practice.' Abstract This article focuses on discussing whether "performance-related pay" (PRP) works well in theory but not in practice. Although it was designed in theory as a good motivation to lead people in organizations to go ahead, in order to improve individual and organizational performance, in practice, however, it is not the only motivator, or even an effective motivator-it can positively demotivate. (Armstrong, 1996, p271) PRP is depicted and discussed in this article, which explains how it works in practice and why it does not work well. A case is also introduced into the article to make some more detailed discusses. Keywords Performance Related Pay; motivation; appraisal; practice. I. Introduction During the late 20th century, human resource management was heralded by a number of writers and academics as a different way of managing the employer- employee relationship. Although HRM has already expanded many branches of theories and the step of development keeps on going ahead, in this essay, we will focus on an important and controversial aspect of Human Resource Management - performance-related pay. PRP emerged in the entrepreneurial 1980s as the answer to motivating people and developing performance-oriented cultures. It was seen as a major lever for change, and the government of the day adopted it with much enthusiasm but little understanding as a means of transforming public sector bodies into businesses. (Armstrong, 1996, p261) This article is divided into several sectors as follows: First of all, we will assess that it works well in theory, and second, analyse how it works in practice and give some detailed analysis based on case, which would show a clash between the theory and the reality. Finally, we will give out our opinion on if 'Human Resource Management works well in theory but not in practice'. II. Performance-Related Pay What is performance-related pay? ...read more.

> Performance criteria stimulate individual behaviour rather than what is good for the entire organization. > Performance appraisal programs reinforce a "caste system." In many firms, there is too much of a gap between middle management and upper management as far as performance rewards go. Such programs, where compensation is tied to appraisals, tend to reinforce established "caste systems". > Performance appraisal is inconsistently applied. This relates to the previous point regarding managers not taking the process seriously. Often, if compensation is supposed to be linked to appraisal results, there are no actual distinctions financially among the levels of performance. > Performance appraisals often amount to little more than one more round of annual form filling. The performance appraisal process is a source of anxiety for supervisors and subordinates alike. (Source: Wilf H. Ratzburg) There are various reasons for these problems, for example, managers' poor performance on appraisal. Despite their widely held belief to the contrary, most managers are not naturally good at conducting performance appraisals (Redman and Wilkinson, 2001, p71). And Longenecker argues that accuracy in performance appraisal is impossible to achieve, since people play social and political games, and they protect their own interests (Wilf H. Ratzburg). Although the performance appraisal has developed much, all the appraisers are still human beings no matter in upward appraisal or in 360o performance appraisal. So to some extent, distorting effects (see Figure 2.2) are unavoidable. Figure 2.2 Rater Biases > Halo effects A single positive or negative aspect may distort the assessment of others. > Doppelganger effect Appraiser tends to rate an employee who is like him more highly. > Crony effect The relationship between appraiser and appraisee distorts appraisal. > Veblen effect Some people, like Veblen, tend to rate all employees at a same middle score. > Impression effect What the appraisers appraise is not exactly what the employees do, but the impression they give. > Contrast effect When compare the performances of two employees, the appraisers may set one of them as standard. ...read more.

We may use 360o performance appraisal, but as long as humans are engaged in the process, there will be a degree of subjectivity, and rater biases would impact appraisal. Secondly, 'almost all teachers who apply for the performance pay get it', when rewards are provided to everyone with no difference, they are actually hardly related to performance and consequently cannot motivate. 'They can only apply after they have taught for six years', thus in fact, these rewards work as punishment to those newcomers. And not surprisingly, this punishment could not help much to attract recruits. Thirdly, in some sense, the rewards result in competition and disrupt relationship and co-operation between teachers. That is why 'the researchers even argue that bonus payments could be counter-productive because teachers were used to working together instead of competing with each other'. For all these reasons, PRP here cannot be seen as a successful one in practice. In short, PRP is not appropriate for every organization, and it does not necessarily lead to the expected objectives. III. Conclusion As has been discussed, performance related pay system is designed to improve employees' performance. But in practice, PRP is often disappointing due to the realistic difficulties, such as the ineffectiveness of performance appraisal, punishing effect of rewards, and other factors that may result in failure of PRP. However, we do not mean that it is completely useless. What we want to say is that an organization should not rely on PRP without thoroughly understanding its potential difficulties and limitations. Employees with intrinsic interest in the work itself would be more likely to achieve higher performance than those who are stimulated by external motivator. And some unexpected 'rewards' may be more effective than incentives to motivate employees' performance development. At the end of this discussion, from which we can conclude that the conflict between theory and practice is always existing in the reality, and the managers in the organizations should try to momentarily adjust their policies and ways in managing to adapt to changing circumstance. ...read more.