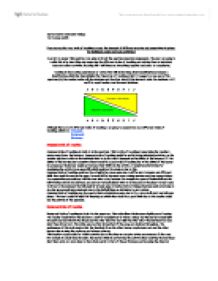 How can you alter your style of teaching to meet the demands of different practice and competitive situations for individual, racket and team activities?

Sutton Centre Community College Terri-Jayne Smith How can you alter your style of teaching to meet the demands of different practice and competitive situations for individual, racket and team activities? In order to answer this question I am going to break the question down into components. The way I am going to tackle this is by describing and comparing the different styles of teaching and relating them to individual, team and racket activities. By doing this I will then sum everything together and come to a conclusion. Teaching is about giving experiences or advice that will aid learning. Mosston (1986) has produced a classification, which has been labelled the "Spectrum of Teaching style". It suggests at one end of the spectrum (A) the teacher makes all the decisions and the other side (J) the learner's make the decisions. At E and F its equal teachers and learners decisions. A B C D E F G H I J A B C D E F G H I J Although there are 10 different styles of teaching I am going to concentrate on 3 different styles of teaching, which are: Command; Reciprocal; Discovery. ...read more.

This style allows the learners slightly more freedom. The teacher would inform the learners a task for example how to throw a discus and the learners would split into pairs and one throws the discus and the other observes and tells the other what they did incorrect and what they did correct. This styles ensures that all members if the group are involved throughout. The weaknesses of this style maybe that the feedback from the other learner maybe incorrect and the other learner who is doing the task may not be keen to listen. This maybe is a good style for racket activity due to the observer can give advice on movement of the arms. For example in a back hand in tennis, the learner which is performing the activity when receiving the back hand shot there arms are very close to there body and is to fast of the performance on the swing the observer learner could suggest to stretch out the performers arms more and slow down the reaction to hit the ball back. This Style in team activity may be useful during team situations if you are practising a skill such as a lay-up in basketball which would be probably ...read more.

In a team situation it would be a good for discovery style due to the team will adapt to each other's ideas and ways of performance and also good in practises as then they can improve on there discovered ways of the skill. Command style is a good style of teaching during situations, which the learners level is cognitive, this reduces danger, as the learners have no freedoms for decisions. Command style is not useful in competitive situations due to the learners attention is in the activity, not at the teacher. I don't think command style of teaching is good for autonomous learners due to lack of freedom, which the learners would find boring. Reciprocal allows the learner more freedom and can be used for cognitive and autonomous learners, which then you do not have to worry about the ability of your class, the only drawback maybe the wrong feedback from learners. And Discovery should be used more for autonomous learners as it allows more freedom but discovery should not be used with cognitive learners due to there would be lack of learning. From this I have come to a conclusion that reciprocal in my opinion is the better style of teaching because it can be used with both cognitive and autonomous learners. Word count= 1,181 ...read more.