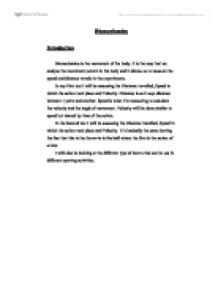 I hope that this test will show me that there less effort needed the further away the weight is from the pivot point. Task 3 I have preformed tests on 2 subjects both doing different sporting actions. The first is a football kick from standing. In this test analysing the movement and the velocity has shown my subjects 1 angle of acceleration In this test I have 7 pages of calculation of the movement that subject 1 did in his kicking action. All the frames are 0.12 seconds. And on the sheet 133mm distance equals 1m real size (133mm = 1m). The subject's leg doesn't move on the first frame it stays in the same position no angle of movement. In my first frame the velocity is 10.59ms-1 and the angle of movement is 0?s. There's no change in angle movement until frames 3+4 when the angle changes to 0.01?s. Changes again in the next frames 5+6 333.33?s it caries on changing and increasing till frames 8+9 when it becomes the recovery stage when the angle becomes -166.67?s as it is coming back to the starting place. And in the final frame it becomes -250?s as it is coming back the starting point. In my calculation my aim was to use trigonometry to calculate the distance of A when B and C are squared and then added and subtracted to equal the length of A. ...read more.

Task 4 Abstract This assignment is on my testing of 2 subjects on 2 different sporting actions. I look at angle of acceleration, velocity and length of A. In my Task 1 I have spoken about 3 different sporting actions I have chosen them all from rugby. One is a drop kick anther is pass and the final one is a tackle. I got all of these of the BBC web site. I analyse all of their movements in these action which could contribute to a good action. Task 2 is about the lever system and how it is in the body and how it effects how everything works in the sporting world. Task 3 is all about the 2 tests that I carried out one a football kick and the other is a football throw-in. I analyse their acceleration and velocity to see how their ability fairs. At the end my report on what I have discovered by doing my test and doing this assignment. Report to the director of WIS. This report is regarding my testing of 2 subjects and seeing their ability level and their techniques. Subject 1 is a 17 year old and has been playing football for about 14 years. Subject 2 is 18 and has also been playing about 14 years. Subject 1 did the football kick. My calculations show how his velocity and angle of acceleration is his kicking action. Subject 2 did the football throw-in. On my calculation for this section they are like a yo-yo up and down not able to estimate the ultimate velocity or acceleration. Reference www.bbc.co.uk/sportacademy ...read more.