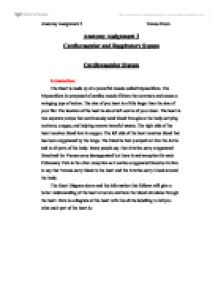 Anatomy Assignment 3 Cardiovascular and Respiratory System Cardiovascular System Introduction: The Heart is made up of a powerful muscle called Myocardium. The Myocardium is composed of cardiac muscle fibbers that contracts and causes a wringing type of action. The size of you heart is a little larger than the size of your fist. The location of the heart is about left-centre of your chest. The heart is two separate pumps that continuously send blood throughout the body carrying nutrients, oxygen, and helping remove harmful wastes. The right side of the heart receives blood low in oxygen. The left side of the heart receives blood that has been oxygenated by the lungs. The blood is then pumped out into the Aorta and to all parts of the body. Many people say that Arteries carry oxygenated blood and the Venues carry deoxygenated but there is and exception for each Pulmonary Vein is the other exception as it carries oxygenated blood so its fare to say that Venues carry blood to the heart and the Arteries carry blood around the body. The Heart Diagram above and the information that follows will give a better understanding of the heart structure and how the blood circulates through the heart. ...read more.

The respiratory system consists of > Nasal cavity > Pharynx > Epiglottis > Larynx > Trachea > Bronchus > Bronchioles > Alveoli Each one of these contributes to the respiratory system to sustain life, as we know it. If one of theses weren't working or doing its job a good as it could you could die. These are all important in sport, as there is a lot of running about going on in most sports. * Nasal cavity is where the gasses enter the body and travel down the body. * The Trachea splits into two tubes called Bronchi one going to each lung. * The bronchi splint into progressively smaller tubes called Bronchioles. * Alveoli- air sacs in the lungs in which gaseous exchange takes place. The air breathed in and out of the body consists mainly on 3 gasses in a health person. * Oxygen the main sores of how we sustain life it only takes up 21% of the air breathed in and out is 16%. * Carbon dioxide, which consists of 2-part oxygen, is 0.04% in and 4% out of the body. * Nitrogen is the highest gas as in there is more of nitrogen takes up the last of the percentages 78% in and out of the body so its not use or at least it re-accumulates in the body to give the same percentage. Anatomy Assignment 3 Tomos Green ...read more.