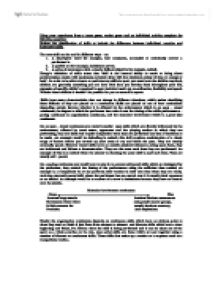 Review the classification of skills to include the difference between individual, coactive and interactive skills.

Using your experience from a team game, racket game and an individual activity complete the following question: Review the classification of skills to include the difference between individual, coactive and interactive skills. The term skill can be used in different ways - as: 1. A descriptive word for example, how consistent, successful or technically correct a performer is. 2. A specific act for example, badminton serves. 3. A series of movements with a clearly defined objective for example, netball. Knapp's definition of skills states that 'skill is the learned ability to result to bring about predetermines results with maximum certainty often with the minimum outlay of time or energy or both'. In order to be able to learn or perform any skills in sport you must have the abilities required, abilities are generally something you are born with then you develop them throughout your life, examples of specific ability's required in sport include: hand/ eye co-ordination, flexibility and speed. ...read more.

And also externally paced skill, where the performer has no control over it is usually their opponent or an official. An example would be a receiver of a serve in badminton because they have no control over the shuttle. Muscular involvement continuum Gross Fine Involves large muscle involves intricate movements Movements where there using small muscle groups, Is little concern for usually involves accuracy Precision. And emphasizes. Finally the organisation continuum depends on continuous skills which have no obvious point to when they start or finish it just flows from element to element and discrete skills which have a clear beginning and finish, it's obvious when the skill is being performed and it can be taken out of the sport as a whole practise on its own. Also serial skills are those which are put together using a number of discrete or continuous skills. These skills that make up a routine or a sequence such as a trampolinist routine. ...read more.

They are the most common forms of skills in P.E. Having clearly identified between individual, coactive and interactive skills and after reviewing the classification of skills I have discovered that they are also relevant to teaching and coaching methods. When considering the requirements of the skill, you need to decide whether it is appropriate to present it as a whole or if it can be simplified into more manageable parts. Skills that are appropriate to be split into parts and which can be easily divided are referred to as 'low organised skills'. Those that are difficult to be divided up are 'highly organised skills'. Highly organised skills tend to be continuous skills as it is difficult to divide them up. Whereas 'low organised skills tend to be serial skills as they are a compound of discrete parts. Another thing would be the environment open and closed skills, whether or not the environment would affect the student learning or the teacher/coach teaching. An example would be a coach teaching a player the technique of shooting you would have to consider the various aspects. Date: 16/11/07 Word count: 1026 ...read more.