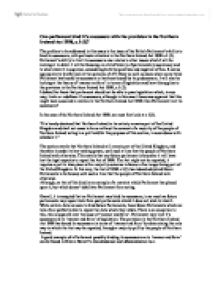 Can parliament bind it's successors with the provision in the Northern Ireland Act 1998, s.1 (1)?

it was contrary to the law of God or the law of nature or natural justice, but since the supremacy of parliament was finally demonstrated by the revolution of 1688 any such idea has become obsolete.2 Through Dicey, the unlimited powers of Parliament to legislate can be placed in three main headings; the power to make any law whatsoever, one manner of law-making and the absence of power to bind succeeding Parliaments.3 Parliament now appears to be completely supreme; all legislation now takes precedence over and could change the prerogative or common law. Any piece of legislation which parliament wishes to accomplish, after being received through the appropriate channels, can become Law in our state. This is seen to have both negative and positive aspects. Negative aspects include that 'there is no person or body of persons who can, under the English constitution, make rules which override or derogate from an Act of parliament, or which(to express the same thing in other words) will be enforced by the courts in contravention of an Act of Parliament.'4 The positive entails that parliament may legislate over any topic, but that parliamentary rulings and enactments must be recognised by the courts. It can however be explained that simply because statute law is superior this does not mean that Parliament may legislate upon anything, as will be shown. ...read more.

Future parliaments may be bound by past Acts in terms of the Act's inclusion of 'manner and form' of legislation, in as much as it may include certain conditions for the Act to be repealed such as achieving a two-thirds or certain percentage majority. Although, future Parliaments may choose to repeal the provisions, they may even choose to completely ignore the later Acts. Overall, Parliaments cannot bind their successors, it is a fundamental rule that this cannot happen. Parliaments are supreme. Past Acts made by past Parliaments are not relevant to the present Parliament, in that any Acts which they wish to change can be changed, when passed through the appropriate channels in Parliament. New Parliaments are sovereign and cannot be sovereign if they were to be bound by predecessors, they must be able to legislate effectively without any limits placed upon them. 1 Dicey, The Law of the Constitution, pp 39-40 2 British Railways Board v Pickin (1974) AC 765 3 Dicey pp 61 4 Dicey quote, Hilaire Barnett Constitutional and Administrative Law, pp 71 5 Vauxhall Estates Ltd v. Liverpool Corpn. (1932) 1 KB 733 6 Ellen Street Estates Ltd v. Minister Of Health (1934) KB 590 7 'the doctrine of implied repeal' Hilaire Barnett, Constitutional and Administrative Law, pp 39 8 Constitutional and Administrative Law, AW Bradley and KD Ewing, pp 61 ...read more.