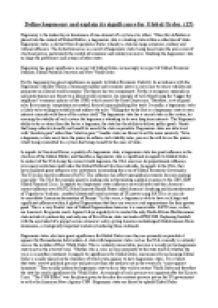 Define hegemony and explain its significance for Global World Order. (15)

﻿Define hegemony and explain its significance for Global Order. (15) Hegemony is the leadership or dominance of one element of a system over others. When this definition is placed into the context of Global Politics, a hegemonic state is a leading state within a collection of states. Hegemonic status is distinct from Superpower Status whereby a state has large economic, military and cultural influence. The distinction arises as a result of hegemonic status being based upon the possession of structural power, particularly the control of economic and military resources. Enabling the hegemonic state to shape the preferences and actions of other states. Hegemony has great significance in respect of Global Order, increasingly in respect of Global Economic Stability, Global Political Structure and New World Order. Firstly, hegemony has great significance in regards to Global Economic Stability. In accordance with the Hegemonic Stability Theory, a dominant military and economic power is necessary to ensure stability and prosperity in a liberal world economy. ...read more.

In regards to the USA, they have displayed great influence over institutions surrounding the issue of Global Economic Governance. The USA also heavily influence NATO. This influence has effect upon global economic decision making especially. The USA for example played a leading role in formulating a global response to the 2007-2009 Global Financial Crisis. In regards to a hegemonic states influence on world order and thus America's current influence over NATO, Nobel laureate Harold Pinter called America's bombing and dismemberment of Yugoslavia ?barbaric...another blatant and brutal assertion of US power using NATO as its missile to consolidate American domination of Europe.? In this sense, a hegemon is able to have such large and significant influence within A global Organisation that they can even use said organisations for their greater good. This is a very Realist view of Global Organisations however it is conceivable. NATO wars, in fact, are America's for greater reach. Against Libya arguably its to control the only North African Mediterranean state outside its partnership, and only one of five African states not under AFRICOM. ...read more.