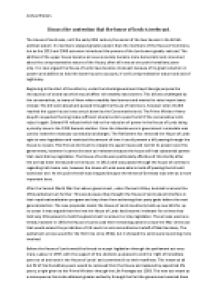 Discuss the contention that the House of Lords is irrelevant.

﻿Joshua Watson. Discuss the contention that the house of lords is irrelevant. The House of Lords was, until the early 20th century the senior of the two houses in the British political system. Its members enjoyed greater powers than the members of the House of Commons, but as the 1911 and 1949 acts were introduced the powers of the Lords were greatly reduced. The abilities of the upper house became an issue as society became more democratic and concerned about the unrepresentative nature of the House; after all it was at one point hereditary peers only. It is now argued the House of Lords have become irrelevant because of its great reduction in powers and abilities to hold the lower house to account; it's still unrepresentative nature and lack of legitimacy. Beginning at the start of the reforms, under the Liberal government Lloyd George purpose the introduction of a land tax which would affect rich wealthy land owners. This bill was challenged by the conservatives, as many of them where wealthy land owners and wanted to raise import taxes instead. The bill went ahead and passed through the House of Commons, however when the Bill reached the upper house it was struck down by the Conservative lords. The Prime Minister Henry Asquith requested the king make sufficient Liberal Lords to pass the bill if the conservative lords reject it again. ...read more.

voting system. A good illustration of this role was when the Thatcher government enjoyed majorities of over 100 following the elections of 1983. This meant the House of Lords were improving parliamentary opposition, effectively holding government to account and making up for the opposition?s weakness. This scrutiny of the executive is made clear through the huge amount of time (around 80%) the Lords spend scrutinising and revising legislation. Their regular attendance and increasing numbers means the House is adopting this role very seriously ensuring their relevancy in the British political system. Arguably the House of Lords have become even more effective at performing this role after The House of Lords Act in 1998 because party leaderships have been selecting more professional politicians to become Lords, who are, arguably, better at scrutinising the executive. As we have seen before, the House of Lords is heavily involved in the Legislative process and although they can no longer stop bills that can (and commonly do) make amendments. A recent example of this was on the 3rd of November 2011, when the House of Lords made 6 amendments to the Armed Forces Bill. This is an important function of the House because it oversees the work of the executive and ensures the elected Government is remaining representative, ensuing accountability. Some criticize this oversight of the executive as irrelevant because the house is not elected, and is a very unrepresentative elitist group. ...read more.

This clearly shows that many political elites see the House as irrelevant in its current state, and would be become more relevant, up to date and perhaps even more effective if these reforms were to go ahead. The Electoral Reform Society see it as 'removing the burden from parliament'. The House of Lords is seen by some as a irrelevant institute that is out of touch with modern society. However I think the second chamber is crucial as it acts as a political safeguard that effectively holds the government to account in the event of poor opposition in the House of Commons. Although the House faces criticism for its undemocratic nature, it is this that allows it to remain a relevant part of society that does no unnecessarily damage the House of Commons. If the House were to be elected by a proportional representation system, such as STV suggested by the Electoral Reform Society, it would become a danger as it would be more representative of the people than the commons and could cause for a demand of power off the lower House. Overall I do not think the House of Lords is irrelevant in modern politics as it performs many important roles effectively, and although at first glance it seems out of place in a democratic society, it would be an executive dictatorship without it. ...read more.