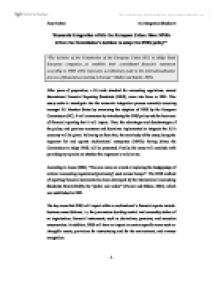 'Economic Integration within the European Union: Have MNEs driven the Commission's decision to adopt the IFRS policy?'

'Economic Integration within the European Union: Have MNEs driven the Commission's decision to adopt the IFRS policy?' "The decision of the Commission of the European Union (EU) to oblige listed European companies...to establish their consolidated financial statements according to IFRS (IAS) represents a preliminary peak in the internationalisation process of financial accounting in Europe" (Haller and Kepler, 2002). After years of preparation, a EU-wide standard for accounting regulations, named International Financial Reporting Standards (IFRS), came into force in 2005. This essay seeks to investigate into the economic integration process currently occurring amongst EU Member States by examining the adoption of IFRS by the European Commission (EC). It will commence by introducing the IFRS policy and the key areas of financial reporting that it will impact. Then, the advantages and disadvantages of the policy, and previous measures and directives implemented to integrate the EU's economy will be given. Following on from this, the main body of the essay, being the argument for and against multinational enterprises (MNEs) having driven the Commission to adopt IFRS, will be presented. Finally, the essay will conclude with providing my opinion on whether this argument is valid or not. According to Anon (2004), "The new rules are aimed at replacing the hodgepodge of national accounting regulations [previously] used across Europe". The IFRS method of reporting financial statements has been developed by the International Accounting Standards Board (IASB), the "global rule maker" (Flower and Ebbers, 2002), which was established in 2001. The key areas that IFRS will impact within a multinational's financial reports include: business consolidations, i.e. the parameters deciding control and ownership stakes of an organisation; financial instruments, such as derivatives; pensions; and executive renumeration. In addition, IFRS will have an impact on certain specific areas such as: intangible assets; provisions for restructuring and for the environment; and revenue recognition. By having a coherent accounting standards policy across EU Member States, this should allow a number of barriers facing economic integration within the EU to be overcome. Grilli (1989) ...read more.

Therefore, this convergence of regulatory standards should result in an improvement of standards in the lesser-developed countries (Guiso et al., 2004). However, there are also incentives for the financial sector of more developed countries. Increased financial integration will allow banks of more developed states to provide cross-border loans to companies of less developed states (Guiso et al., 2004). I believe that the likelihood of this will now be increased in the era of IFRS, as public companies from within the EU will be more easily understood and interpreted by foreign banks. By primarily expanding the financial sector in those states that are already financially developed, integration may increase competition for available funds between their non-financial firms and foreign firms for such funds (Guiso et al., 2004). This should increase the efficiency of financial centres due to their increased activity and therefore, financial integration will have increased the availability of funds and efficiency of financial services in all integrating countries (Guiso et al., 2004). In conclusion, it can therefore be seen that the adoption of IFRS will be a significant step in the harmonization of accounting standards across the EU. However, I believe to a certain extent that MNEs have driven the Commission to adopt IFRS. This is due to the increasing importance of trade and investment, external financing and outsourcing, which I believe has put significant pressure on the EU. Although there are other reasons as to why the EU has adopted this policy, but I believe these do not carry as much weight as the MNE arguments. Nevertheless, according to Anon (2004), "While the goal of the IFRS remains admirable, the short-term result could be confusion, especially if the EU continues to allow companies to opt-out of those regulations they don't like". Anon (2004) suggests that the sooner the IASB and the European Commission can reach an agreement over the evasion of regulations by firms, the sooner the benefits of IFRS will be fully achieved. ...read more.