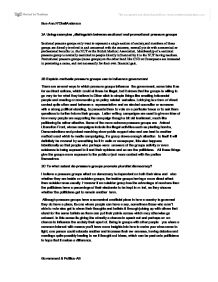 Examples, methods and the effects on democracy of pressure groups.

3A Using examples ,distinguish between sectional and promotional pressure groups Sectional pressure groups only want to represent a single section of society,and members of these groups are directly involved in and concerned with the outcome, normally to do with economical or professional benefits i.e. the NUT or the British Medical Association. Membership of a sectional pressure group is normally restricted to people directly influenced by it ie the NUT having teachers. Promotional pressure groups (cause groups) on the other hand like CND or Greenpeace are interested in promoting a cause, and not necessarily for their own financial gain. 3B Explain methods pressure groups use to influence government There are several ways in which pressure groups influence the government, some take it as far as direct actions, which could at times be illegal, but it shows that the groups is willing to go very far for what they believe in.Other stick to simple things like emailing influencial people and creating or commenting on policy related websites. Lobbying is a form of direct contact quite often used between a representative and an elected councillor or someone with a strong political standing, to persuade them to vote on a particular issue or to ask them questions to further inform their groups. ...read more.

In this sense its giving the minority a chance to speak out and perhaps even chance to influence the society their apart of. Being in groups with other people you share a common interest with means you'll have more insights into how to make your aims come to light, one person could educate another and increase their awareness, having debates and meetings quite possibly leading to well thought out ideas, which can be past unto politicians in hope that it makes a difference. Despite these groups enabling a voice, some say pressure groups only increase the gap between the wealthy and less fortunate, as groups with higher level of education and better financial status are likely to have more connections and possibly better organisation skills and so their pressure groups interest will be more likely to become reality and these will only be against the majority of the UK as working class is the majority .The more well off proportion of society are also a lot more likely to be members of insider groups and being such get to have more access to the outsiders who tend to do ...read more.

Wouldn't movements and events brought about by pressure groups happen in a different way or at a different pace without their existance? The public are in control of who leads them and sooner or later may have done something if pressure groups weren't around, and there aren't many if any at all, pieces of evidence that show statistics proving that pressure groups have made an impact on things like participation. However the fact that pressure groups exist at all is a great statement of there being a pluralist democracy as it's a place where you can freely peruse and express your common interest. The fact that there usually is no age restriction also means that this non central power is even more representative of citizens and does promote pluralist democracy- when listened to in a way I feel they are promoting pluralist democracy and as such stand as a positive factor of our society that give everyone a chance to speak as one with others who want the same. ?? ?? ?? ?? Sue-Ann.R'ChellAnderson Government & Politics-AS ...read more.