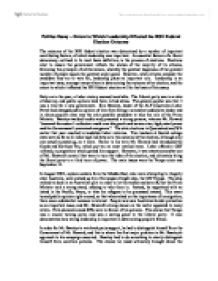 Extent to which leadership effected the 2001 federal election outcome.

Politics Essay - Extent to Which Leadership Effected the 2001 Federal Election Outcome The outcome of the 2001 federal election was determined by a number of important contributing factors, of which leadership was important. An essential feature of a liberal democracy, outlined in its most basic definition, is the process of elections. Elections exist to ensure the government reflects the wishes of the majority of its citizens, following the principle of utilitarianism, whereby the greatest happiness of the greatest number of people equals the greatest social good. However, when citizens consider the candidate they are to vote for, leadership plays an important role. Leadership is an important issue, amongst many others in determining the outcome of an election, and the extent to which it effected the 2001 federal election will be the basis of this essay. Early on in the year, a Labor victory seemed inevitable. The Liberal party was in a state of disarray, and public opinion held them in bad status. The general psyche was that it was a time for a new government. Kim Beazley, leader of the ALP (Australian Labor Party) ...read more.

After all, it was Mr. Howard's attitude towards the Tampa issue that had turned the tides in his favour, and Beazley only made this situation worse for himself: "When John Winston Howard sent in the Special Air Service to stop the Norweigian freighter MV Tampa from unloading its human cargo on Christmas Island, he was transformed publicaly from Prime Minister on the verge of political oblivion to loyal defender of Australia's sovereignty" When he realised his mistake, Beazley became very quiet about the issue and somewhat condoned it. This 'wavering' policy cost him dearly, as it reflected to the people a weak leader, and when compared with Howard's example, Beazley had all but lost his initial popularity. Mr. Beazley's support was further damaged after September 11, after which "the role of opposition leader's everywhere (was rendered) strangely irrelevant." On September 11 2001, terrorists flew two hijacked passenger liners into the twin World Trade Centre towers in America. This caused much outrage across the world, with George Bush promising revenge via a war on terror. It has been a trend seen through history that in times of crisis and conflict political leaders gain great popularity from the people, as it is a perfect opportunity to shine as a leader. ...read more.

The campaigning strategies used by the opposing parties also show how they directly used leadership as a tactic. On television, the Liberals had an advert questioning the public as to who would make the tough decisions, saying Mr. Howard had the experience and had proved himself in recent times. Labor, however, retaliated by saying that if voters brought in the Liberals, Peter Costello would take over as Prime Minister, a man unpopular with the public. In conclusion, leadership was a very important factor in determining the outcome of the election. However, the two events outside the control of either of the candidates, those of the Tampa crisis and September 11, were used as a vehicle by the Liberal party to show John Howard's capabilities as a leader. These events allowed Mr. Howard to shine; in times of crisis the party with the advantage of incumbency become very popular, and a change of Government is undesirable. Beazley was on a sure path to success, but Tampa and September 11 rendered a Labor victory all but impossible. It was clear from pre-election polls that after these events Labor's substantial popularity was completely reversed in favour of the coalition. Each party's campaigns also showed the value placed on leadership, this being the most substantial issue dealt with in television advertising. ...read more.