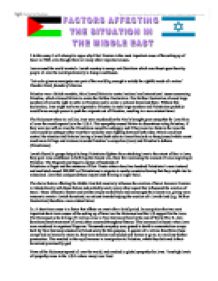 Factors Affecting the Situation In the Middle East.

1.In this essay I will attempt to argue why I feel Zionism is the most important cause of the setting up of Israel in 1948, even though there are many other important causes. Jews around the world wanted a Jewish country to escape anti-Semitism which was thrust upon them by people all over the world particularly in Europe and Russia. 'Let us be given sovereignty over part of the world big enough to satisfy the rightful needs of a nation' Theodor Herzl, founder of Zionism Palestine was a British mandate, this allowed Britain to control national and international issues concerning Palestine, which allowed Britain to create the Balfour Declaration. The Balfour Declaration allowed large numbers of Jews the right to settle in Palestine and to create a national homeland there. Without this declaration, Jews might not have migrated to Palestine in such large numbers and Palestinians probably would have enough power to push the migrants out of Palestine, resulting in a non-existent Israel. The Holocaust where six million Jews were murdered by the Nazi's brought great sympathy for Jews from all over the world especially in the U.S.A. This sympathy caused Britain to discontinue ruling Palestine; if they were too soft on Jews the Palestinians would be unhappy, and if they were too hard on the Jews the Jews would be unhappy either way their would be more fighting between both sides. Britain could not control the situation and Britains leaving allowed both sides to almost freely do as they pleased which meant much more killings and violence towards Palestine's occupation (Jews) ...read more.

Britain who ruled Palestine as a mandate set up a Jewish army to control the Arabs, they equipped them with weapon's and training. Palestinians didn't want too many Jews immigrating into and taking over their country so they killed some Jews, as a result the White Paper was set up in 1939, it restricted the amount of Jews migrating to Palestine. This pleased and calmed the Palestinians, but displeased the Jews, Jews now attacked the British as a retaliation. During WWII (1939 to 1945) Jews fought the Germans, helping Britain and the Allies, however some Jews carried on fighting Britain. A lot of Jews were still brought into Palestine against the White Paper. A civil war formed in Palestine between the Jews and Arabs as UNSCOP's (U.N Special Committee On Palestine) partition plan was to take place on may 1948, came nearer, since Britain abandoned Palestine as it's mandate (Britain could not handle the conflict between Jews and Arabs). UNSCOP had drawn up a plan to split Palestine into an Arab state and a Jewish state. Palestinians were not content with UNSCOP's partition plan as the proposed Jewish state was larger than the Arab state and it had the most fertile land, the Palestinians were left with mostly desert. The Jewish state also consisted of the most land even though the Jewish population was only 1/3rd of Palestine and Jews currently owned only 1/10th of Palestine. Zionism, the idea of a Jewish homeland, was the main cause of the setting up of Israel. It was thought up of and strengthened because of anti-Semitism around the world and the belief that Palestine was given to Jews by god was also a force that powered Israel's creation. ...read more.

Hundreds of news cameramen had recorded and broadcast the event as the aircraft were being blown up. "When we hijack a plane it has more effect than if we killed a hundred Israeli's in battle. For decades world public opinion has been neither for nor against the Palestinians. It simply ignored us. At least the world is talking about us now." A member of the PFLP describing the aim of the hijacks, Taken from Conflict in Palestine, by Josh Brooman In 1972 the PFLP kidnapped and killed all 11 Israeli athletes taking part in the Olympic games in Munich. These and other terrorist activities brought Palestinian attention to the rest of the world. After the Yom Kippur war in October 1973, between Israel, and Egypt and Syria; Sadat, leader of Egypt, and Menachim Begin, prime minister of Israel agreed to allow some rights of self government to Palestinians in the West Bank within the next 5 years, and that Israel would gradually move out of Sinai. Sadat was killed on the 6th October 1981 by Egyptian soldiers. Terrorist groups such as the PFLP continued their acts of terrorism, and new groups such as Hamas, and Hezbollah continue to use terrorism to regain Palestine right up to the present day. Suicide bombers were used most recently by these groups against Israel. Israel has continued fighting terrorism by attacking terrorist organisation bases of Hezbollah in Lebanon in 1996. Hamas leaders have been murdered by Israeli agents. Israel has been affected greatly by terrorism for many decades and will probably continue to be attacked by terrorists. If Israel was not created in 1948 and supported by Britain and the U.S, Palestine might still exist and therefore there would be no terrorist groups. ...read more.