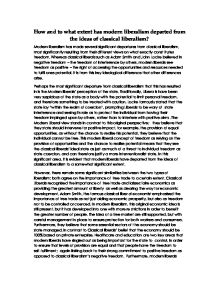 How and to what extent has modern liberalism departed from the ideas of classical liberalism?

How and to what extent has modern liberalism departed from the ideas of classical liberalism? Modern liberalism has made several significant departures from classical liberalism, most significantly resulting from their different views on what exactly constitutes freedom. Whereas classical liberals such as Adam Smith and John Locke believed in negative freedom - the freedom of interference by others, modern liberals see freedom as positive - the right of accessing the opportunities and resources needed to fulfil ones potential. It is from this key ideological difference that other differences arise. Perhaps the most significant departure from classical liberalism that this has resulted in is the Modern liberals' perception of the state. Traditionally, Liberals have been very suspicious of the state as a body with the potential to limit personal freedom, and therefore something to be treated with caution. Locke famously stated that the state lay "within the realm of coercion", prompting Liberals to be wary of state interference and seeing its role as to protect the individual from having their freedom impinged upon by others, rather than to interfere with positive aims. ...read more.

In modern liberalism, this original economic idea is still present, but it has developed into one with more restrictions in order to benefit the greater number of people. The idea of a free market are still supported, but with careful management in place to ensure protection for both workers and consumers. Furthermore, they believe that some essential sectors of the economy should be state managed, in contrast to Classical liberals' belief that the economy should be 100% based on private enterprise. Healthcare and education are two key areas that modern liberals have singled out as being important for the state to control, in order to ensure that levels of provision are equal and that people have the freedom to self-fulfilment; again linking back to their strong commitment to positive freedom as opposed to classical liberalism's negative freedom. Furthermore, modern liberals believe that taxes should be levied and regulation implemented across the economy again to aid the provision of certain state services and protect the consumer, something that has become known as Keynesianism after the modern liberal economist J.M. ...read more.

T.H. Green, a modern liberal thinker, believed that Liberty was only attainable in favourable economic circumstances, and this necessitated some form of help to be given to those in need in order for them to be free, and modern liberals see welfare as a 'hand up, not a hand out'. This clearly represents a significant departure from Classical liberalism. Over the years, modern liberalism has departed from classical liberalism to a large extent. Their fundamental difference in what constitutes freedom - Classical liberals and negative freedom, the belief that freedom constitutes protection from exterior limits to individual liberty, and Modern liberals who believe in positive freedom, that liberty constitutes the opportunity to realise ones potential to its full extent - have lead modern liberals to depart quite significantly from the classical philosophy. They have rejected the ideas of a limited state and embraced the concept of welfare and social justice as well as imposing regulation and limits on the economy with the aim of securing individual liberty via 'positive', rather than classical liberalism's 'negative' liberal policy. ...read more.

5 Stars - A very strong essay. The structure and technique is excellent - the points are logically linked together, and the argument is constantly reiterated and re-evaluated before the conclusion is skillfully reached. subject knowledge and understanding is strong, with quotes and supporting material well selected and applied. The essay is also clearly and articulately expressed.