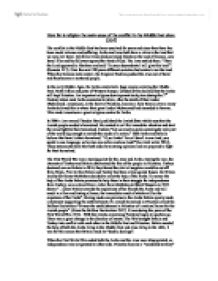 How far is religion the main cause of the conflict in the Middle East since 1914?

How far is religion the main cause of the conflict in the Middle East since 1914? The conflict in the Middle East has been unsolved for years and since then there has been much violence and suffering. Arabs and Jews both have a claim to the land that we now call Israel. In biblical times God promised Abraham the land of Canaan, now Israel if he and his followers spread the word of God. The Jews settled there. "Then the Lord appeared to Abraham and said 'To your descendants I will give this land'". (Genesis 12:7). Over the next 700 years different societies had control over the land. When the Romans took control, the Emperor Hadrien pushed the Jews out of Israel and they became a scattered people. In the early Middle Ages, the Arabs controlled a huge empire covering the Middle East, North Africa and parts of Western Europe. Gradually this declined but the Arabs still kept Palestine. An important religious development took place during the 7th Century when most Arabs converted to Islam, after the death of their leader Muhammed. Jerusaluem, in the heart of Palestine, became a holy Islamic city as many Arabs believed this is where their great leader Muhammed had ascended to heaven. This made Jerusaluem a great religious centre for Arabs. ...read more.

The United Nations decision in The Peel Commission to split Palestine meant that two states could be created; one Jewish, one Arab. Neither side could accept the idea of their homeland being divided and so violence broke out in December 1947. The worst incident was at Deir Yassin where Jewish forces murdered several hundred Arabs. The division of Palestine angered both sides immensely because they both believed that the whole of Palestine should be theirs. In May 1948 the Jews took over the city of Haifa, which was part of the designated new Arab State in the new UN partition plan. Five Arab countries then invaded Israel- Lebanon, Transjordan, Syria, Egypt and Iraq. Surprisingly the Israelis managed to defeat the Palestinians and gain more land than had been originally allocated to them. This first Arab- Israeli War, known as The War of Independence was really a series of disorganised clashes between small units, because of this most fighting only lasted a few days. By the end of the hostilities more than 700,000 Palestinian Arabs had fled their homeland to live in neighbouring Arab countries. These refugees were angry at losing their homelands The mass refugee camps of the Palestinians became bases for those Palestinians Arabs who wished to expel the Jews from their homeland. The Egyptian President, Gamal Abdul Nasser who had close links with the USSR, encouraged these fighters. ...read more.

Violence and conflict has occurred due to other factors such as international involvement. For example Britain and The Balfour Declaration, which was a ploy to involve the USA and keep Russia in the war. Also America's involvement was mainly due to the highly important factor of oil, and keeping the economy intact. The involvement of other countries encouraged both the Israelis and Arabs to come into conflict more, especially when the UN split Israel in two, and made both sides even more outraged, and hungry for more land, which they believed was theirs by right. Wars such as The Yom Kippur War were backlash from a previous war, and was Palestine trying to seek revenge from previous damage done and so other Arab nations became involved in invading land as by means of not being defeated. Terrorist groups such as the PLO were also just seeking revenge and responding to backlash, and the greed for more land. What had begun as a religious claim for the land from the Israelis "This is our homeland. Our ancestors lived here in ancient times" and the counter claim of the Arabs that they had always been there ("The Arab case is based on the principle that only people who can claim ownership of their country are those who are born there" David Humphries) has developed into a conflict which now includes factors such as foreign interests, world oil resources and the position of Palestine itself. ...read more.