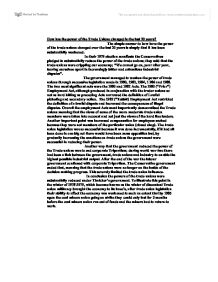 How has the power of the Trade Unions changed in the last 20 years?

Employment Act restricted the definition of a lawful dispute and increased the consequences of illegal disputes. Overall the employment Acts most importantly democratised the Trade unions meaning that the views of some of the more moderate trade union members were taken into account and not just the views of the hard line leaders. Another important point was increased compensation for employees sacked because they were not members of the particular union (closed shop). The trade union legislation was so successful because it was done incrementally, if it had all been done in one big act there would have been mass opposition but, by gradually increasing the sanctions on trade unions the government were successful in reducing their power. ...read more.

The Conservative government ended that, meaning that the trade unions were no longer on the inside of the decision making progress. This severely limited the trade union influence. In conclusion the powers of the trade unions were substantially reduced under Thatcher's government. To illustrate this point in the winter of 1978\1979, which became known as the winter of discontent Trade union militancy brought the economy to its knee's, after trade union legislation their ability to affect the economy was weakened to such an extent that by 1985 upon the coal miners union going on strike they could only last for 3 months before the coal miners union ran out of funds and the miners had to return to work. ...read more.