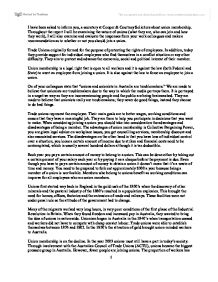 I have been asked to inform you, as secretary at Cooper &amp; Courtney Solicitors about union membership.Throughout the report I will be examining the nature of unions (what they are,who can join and how they work), I will also examine and evaluate th...

I have been asked to inform you, a secretary at Cooper & Courtney Solicitors about union membership. Throughout the report I will be examining the nature of unions (what they are, who can join and how they work), I will also examine and evaluate the responses from your work colleagues and make a recommendation as to whether or not you should join a union. Trade Unions originally formed for the purpose of protecting the rights of employees. In addition, today they provide support for individual employees who find themselves in a conflict situation or any other difficulty. They aim to protect and advance the economic, social and political interest of their member. Union membership is a legal right that is open to all workers and it is against the law (both Federal and State) to avert an employee from joining a union. It is also against the law to force an employee to join a union. On of your colleagues state that "unions and unionists in Australia are troublemakers." We are made to believe that unionists are troublemakers due to the way in which the media portrays them. It is portrayed in a negative way as they are inconveniencing people and the public are being brainwashed. They are made to believe that unionists really are troublemakers; they never do good things, instead they choose to do bad things. Trade unions represent the employee. Their main goals are to better wages, working conditions and ensure that they have a meaningful job. ...read more.

Unions can help you in so many ways. For example, if you as an employee weren't in a union and you weren't happy with the working conditions or the rate of pay received you wouldn't have much of a chance getting your way. However if you were a member of a union you could report it and if the rate of pay or working conditions is not changed a union can negotiate and help improve this. Unions are always making sure that you as an individual are receiving a fair go. Unionism is based on numbers. One person doesn't have much power whereas a whole union has masses of power - they listen to bigger numbers. Unions are there to help you by providing you with the necessary needs of an employee. Unions make sure that you as an individual gets a fair go by offering you specific benefits such as safety in the workplace, long service leave, credit union and health, shorter hours, annual leave and maternity/paternity leave. These are the benefits that an employee deserves. Another of your colleagues stated, "you only have to look at what happened in the 1980's to see how important unions are." "A trade union's fundamental responsibility is to its membership." (Brooks, 1980:78) Despite laws, most disputes between employers and employees were settled through direct action, with workers striking and leaving their job. This has narrowed in recent years due to more coherent compromise between parties, enterprise bargaining and completion of the Accord. ...read more.

The wharfies won a series of important improvements in their working conditions such as control of employment, whether to work overtime and payment for handling obnoxious cargoes. It is the wharfies that made unions successful today. The law protects everyone from unfair discrimination in workplaces. It is unlawful to discriminate against people on the basis of trade union membership. If you are treated unfairly because you belong to a union, you have been discriminated against and you have the right to lodge a complaint, as this is illegal. Sally, in having taking into consideration what your work colleagues have said, I advise you to join a union. Even though your friends have told you that union members are troublemakers, it is the way that the media has portrayed this vision that makes you believe this. Don't always believe what you hear. Unions are as significant today as they were in the past. They are still very important due to the fact that they became the biggest pressure group in Australia. Although unions only cater for employees, don't forget that there is the employer associations that represent the employers. "For a worker to refuse to belong to a union is not to exercise a democratic freedom. It is to accept benefits that others have worked for, without contributing to the costs. Democracy flourishes only when freedom is accompanied by responsibility." If you choose not to belong to a union you still get the benefits but it's a very selfish thing to do. Unions work as a group and are there to support you when you are in a conflict situation or any other difficulty. 1 ...read more.