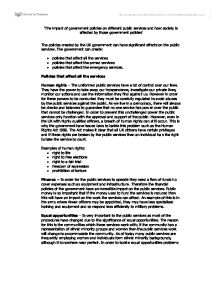 There are pros and cons of using reserve forces. Commanding officers have indicated that reservists may be less physically fit to handle with the demands of conflict and frequently they had not received satisfactory training or had the chance to be deployed with a regular unit. On the plus side, they bring a wealth of experience from their civilian lives which can improve the service greatly. The government is dedicated to preserving reserve forces although they are considering policy changes on how they are trained and organized to try to bring them in line with their regular counterparts. Use of technology - The armed services have always been in the forefront with the use of technology. They have provided the incentive for the development of many areas of technology with war and conflict improving productive procedures. This has become predominantly true in the war against terrorism where cutting-edge technology and surveillance equipment have been used by both military and civilian counter-terrorist experts to protect the public. Military aviation and missile guidance are examples of modern military technologies. Links with international services - As a result of the coordinated policy of the North Atlantic Treaty Organisation (NATO), of which the UK is a founder member, we are able to endure collective defence capabilities. ...read more.

congregate outside a place of work or location where an event is taking place. Often, this is done in an attempt to dissuade others from going in ("crossing the picket line"), but it can also be done to draw public attention to a cause. Picketers normally endeavor to be non-violent The Royal Mail Strikes in 2009 are an example of this. The public services themselves rarely strike (in fact many are forbidden from doing so by law) but the fire service has a history of national strikes, the last being in 2002. Sit-ins Sit-ins are a peaceful way of demonstrating against an issue by causing great inconvenience and delay to the people trying to implement the decision. For example, it is a tool often used by environmental protesters who want to oppose the building of new roads. They build camps underground, in trees and generally make it impossible for work to begin safely. The Newbury bypass which opened in 1998 had a total of 29 camps set up at one point including tree houses and a tunnel network. Although the protesters didn't stop Newbury it led to a change in government thinking on the building of new roads, which led to the Salisbury bypass being stopped on the basis of the environmental impact. ?? ?? ?? ?? 'The impact of government policies on different public services and how society is affected by those government policies' ...read more.

3 Stars. This piece of work is thorough and well organised, and in places chooses relevant, well-explained examples to support its points. The quality of the written communication is good, and strong, thorough subject knowledge is demonstrated.
Where the essay could be improved is by explicitly focusing on the question. This is achieved by regularly making reference to it throughout the answer, evaluating the points and how they contribute towards the argument. I also feel the question follows quite a narrow definition of public services - what about hospitals, schools etc?