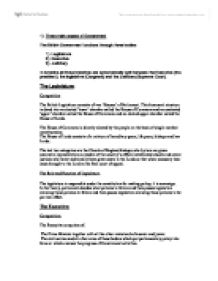 comprises of: The Home Secretary, The Lord Chancellor , the Secretaries of State for Northern Ireland and for Scotland, the Attorney-General and the Solicitor General and the Prime Minister who recommends judicial appointments to the Monarch. The Role and Function The Home office: deals with, the metropolitan police directly and the police in the provinces indirectly. They also deal with the prison service, public morals, race relation and with the introduction of criminal law The Lord Chancellor: deals with the administration of the courts and the appointment of judges and magistrates. The Law Officers Department: consists of the Attorney-General and the Solicitor-General, both who are the members of Parliament, act as legal advisers to the Crown and the government. ...read more.