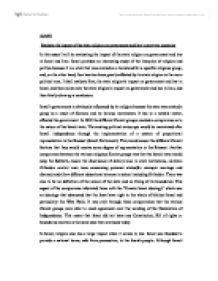 Israel's Nationality Law defines the terms through which one can be granted citizenship of the state of Israel. Israel is, by its own definition, the state of the Jewish nation, and its leadership believes that one of its primary objectives is keeping a Jewish majority in Israel. Thus, Israeli nationality law is created with a bias in favour of those with Jewish heritage. Also in terms of ownership of land, before independence the Jews owned about 7% of the land in what was to become Israel. Today figures are very different, 75% is owned by the government, 20% is owned by the Jewish National fund and 5% is owned by Palestinian Arabs. The population figures for 2003 were 5 million Jews and 1.3 million Arabs. Thus the Arabs who made up 16% if the population only owned 5% of the land of Israel. These statistics mainly came about due to two things, "The Defence Regulations Act", which allowed the military to designate "closed areas" where Arabs were not allowed to own land, and "The Agricultural Settlement Law of 1967 which prevented anyone who was not Jewish from leasing land belonging to the government of Israel. ...read more.

The Supreme Leader is Commander-in-Chief of the armed forces, controls the military intelligence and security operations; and has the only power to declare war. The heads of the judiciary, state radio and television networks, the commanders of the police and military forces and six of the twelve members of the Council of Guardians are appointed by the Supreme Leader. The religion of Iran also plays a significant role in law. In Iran the law must conform to the teachings of the Sharia; all laws much measure up to Islamic belief and law. These laws include, dress code, segregation of the sexes (also in education), and observation of the requirements for prayer. There was a reintroduction of polygamy after the Shah had banned it, in the event of divorce; children would go with the father, also women's rights that had been established by the Shah were now gone. Also, banking had to conform to Islamic criteria. Enforcement of the religious law was handled by special groups within the population. Punishments were very brutal for breaking these laws, or disobeying them. The punishments included stoning people to death, cutting off the hands of thieves and public flogging and executions. In conclusion, it is quite visible that the state religion does play a noteworthy role in the two countries examined and has a huge impact on the government and the law in these states. ...read more.