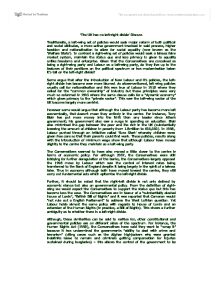 ‘The UK has no left-right divide’ Discuss

Traditionally, a left-wing set of policies would seek major reform of both political and social attitudes, a more active government involved in said process, higher taxation and nationalisation to allow for social equality (now known as the ‘Welfare State’). In contrast a right-wing set of policies would seek a laissez faire market system, maintain the status quo and less primacy is given to equality unlike freedoms and enterprise. Given that the Conservatives are conceived as being a right-wing party and Labour as a left-wing party, do they live up to the features of their positions on the political spectrum or has modernisation taken it’s toll on the left-right divide?

Some argue that after the introduction of New Labour and it’s policies, the left-right divide has become ever more blurred. As aforementioned, left wing policies usually call for nationalisation and this was true of Labour in 1918 where they called for the “common ownership” of industry but these principles were very much so reformed in 1995 where the same clause calls for a “dynamic economy” which gives primacy to the “private sector”. This saw the left-wing sector of the UK become largely more centrist.

However some would argue that although the Labour party has become more left economically, that doesn’t mean they entirely in the centre. For instance, Tony Blair has put more money into the NHS than any leader since Atlee’s government; his government also saw a surge in spending on education. Blair also minimised the gap between the poor and the rich in the UK (substantially lowering the amount of children in poverty from 1.8million to 600,000). In 1998, Labour pushed through an initiative called ‘Sure Start’ whereby children were given free care so that their parents could find work. These policies, results along with the introduction of minimum wage show that although Labour have moved slightly to the centre they maintain as a left-wing party.

The Conservatives seemed to have also moved a little closer to the centre in terms of economic policy. For although 2007, the Conservatives were still lobbying for further deregulation of the banks, the Conservatives largely opposed the 1998 move by Labour which saw the control of interest rates being transferred to the Bank of England despite it being largely in the spirit of a laissez faire. Thus in economy although both have moved toward the centre, they still carry out fundamental acts which epitomise the left-right divide.

Further, it should be noted that the right-left divide is not only defined by economic stance but also on governmental policy. From the definition of right-wing we would expect the Conservatives to support the status quo but this has become less the case. The Conservatives are in favour of a “substantially elected House of Lords”, “British Bill of Rights” and it was reported that Cameron would “not rule out a English Parliament” to address the West Lothian question. Yet Labour holds almost the same policy with regards to House of Lords and an extension of the Human Rights (in practice, a Bill of Rights). This shows a further ambiguity as to whether there is a left-right divide.

Although, these similarities can be said to rarities for, other constitutional and governmental policies are on different sides of the spectrum. For instance, the Human Rights Act (1998), the Conservatives have said they want to “scrap it” because it has undermined the governments “ability to deal with crime and terrorism” (citing cases such as the Afghan highjackers who were granted indefinite leave to remain and criminals getting compensation for injuries sustained during burglaries) – this allows the control of the government to be subsided. This is in complete contrast who hopes to “strengthen” the Human Rights Act.

Political commentator Fukuyama have suggested that because one of the major strongholds of the left, communism, has fallen which means that the divide between left and right is no longer substantial divide, not just in the UK but globally. However this argument fails to note that the left, although maybe moderated is still present. One country which presents this is Israel, whereby although no party is extreme (in the sense that they are communist) that some parties with substantial backing such as Kadima support a complete welfare state however those in right-wing parties such as Likud support a complete laissez faire – even in the current economic climate. This is also made evident in the UK through the earlier example of the Conservatives lobbying for further deregulation in 2007.

It can be argued that there is no substantial left-right divide because this country deals with policy in such a way that it depends on situational factors rather than party dispositional ones. This would conclude with the view that parties consider (or in the case of Government of the day execute) on the basis of “what works”. However this point seems to completely ignore the factors that the Conservatives and the Labour parties contest – even now, the Conservatives and Labour have contrasting economic solutions for the economic crisis which are deep rooted in ideology (the Conservatives planning to reduce taxes and Labour to maintain the rate currently in place with expected increases).

Another reason that people think that the left-right divide no longer exists is because modern politics encompasses many things which are cross-spectrum thoughts and the difference lies with the where they lie on the ‘authoritarian’ or ‘libertarian’ line (the so called ‘y axis’) and thus because most modern day issues (such as abortion, homosexuality and environmentalism) revolve around these the right-left divide no longer exists. However, again, although the modern day issues may stretch across the left-right spectrum some of the most fundamental ones (economy, government and reform) remain firmly on the left-right line.

Thus, to conclude, we must say that the left-right divide still exists in the UK as the fundamental principles of it are largely determined by ideology such as the action taken by Labour in 1998 and the Conservative preoccupation with lower taxation and laissez faire even in the current economic climate. Furthermore, the approaches to governmental policy (for the Conservatives) and economic (for Labour) although may have drastically changed, they have merely been moderated and not completely eradicated.