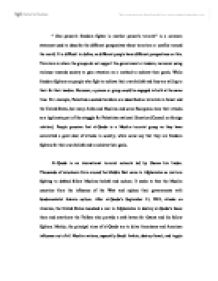 &quot; One person's freedom fighter is another person's terrorist&quot; is a common statement used to describe the different perspectives about terrorism or conflict around the world.

" One person's freedom fighter is another person's terrorist" is a common statement used to describe the different perspectives about terrorism or conflict around the world. It is difficult to define, as different people have different perspectives on this. Terrorism is where the groups do not support the government or leaders, moreover using violence towards society to gain attention as a method to achieve their goals. While freedom fighters are people who fight to achieve their own beliefs and they are willing to their for their leaders. However, a person or group could be engaged in both at the same time. For example, Palestinian suicide bombers are described as terrorists in Israel and the United States, but many Arabs and Muslims and some Europeans view their attacks as a legitimate part of the struggle for Palestinian national liberation (Council on foreign relation). People perceive that al-Qaeda is a Muslim terrorist group as they have committed a great deal of attacks in society; while some say that they are freedom fighters for their own beliefs and to achieve their goals. ...read more.

Osama bin Laden's terrorist tactics have said to violate the fundamental Islamic belief against suicide and the killing of innocents. The masses that hold this Islamic fundamentalism share his frustration, anger and mistrust of the West as he's trying to make the West understands what are they going through (Bhatt, Sanjay). This group had spread fear and anxiety to the world. Osama bin Laden used psychological, religious and strategic perspective in motivation to their acts. They wanted to gain attention from the world because they were not given any priorities or rights. They portrayed their courage by preparing to sacrifice their lives for their religious leaders. The group has targeted American and other Western countries as if it presumes as corrupted or immoral. (Hayes, Laura). The Al-Qaeda attacks include: The killing of U.S. soldiers in Somalia, 1995-1996, bombing of U.S. barracks in Saudi Arabia causing 22 soldiers killed (Hayes, Laura), the May 2003 car bomb attacks on three residential compounds in Riyadh, Saudi Arabia . ...read more.

(Bhatt, Sanjay). They can be considered a state-sponsored terrorist group. They received weapons and billions of dollars in aid from the United States. Islamic radicals, including Sheikh Omar, bitterly remember how the United States pulled its aid once Soviet troops left Afghanistan (Bhatt, Sanjay). This has resulted to the failure of the Arab-Israeli peace process that may have provoked the Sept. 11's attacks in United States. Their attacks mostly are based on psychological perspective where they have their own personal goals such as revenge. Terrorism is defined when certain parties use violence in their attacks and intend to influence the systems of certain countries. They spread fear and anxiety world wide to gain attention because they did not manage accomplish their goals. While, freedom fighter fight for their beliefs without causing harm to the society. Al-Qaeda can be considered as terrorists because they have committed a large number of major attacks, which have lead to deaths and mass destruction. "In order to tackle terrorism we need to understand where they're coming from. We need to understand their mind-set to fight back and fight back effectively" (Bhatt, Sanjay). ...read more.