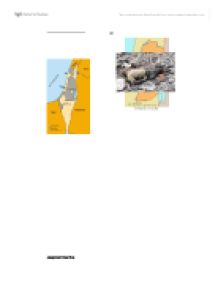 Are Any Reasons More Important Than Others In Causing Palestinians Acts Of Terrorism? The Arab Israeli conflict has been continuing for 50 years, this is an argument between two groups of people over an area of land in the Middle East named Israel. Israel/Palestine is promised by both holy texts of Jews and Arabs (Muslims) so name it their "Promised Land". The two main groups involved are Jews and Palestinians; Israel was set up for Jews in 1948 but unfortunately Arab people (Palestinians) did not want to give up their land for Jews (Israelis). These two sides have been arguing ever since and it has resulted in wars, terrorism and peace treaties. Palestinians carry out acts of terrorism against Jews as acts of self defence and feel they are doing it for a right reason; in a documentary made by John Pilger he shows damaged buildings throughout the state of Palestine which had been bombed by Israelis. The issues in this area are as a result of history and go back thousands of years; thus both sides state its claim to own Palestine is greater than its opponents. This root cause of this problem has come out of religion, history and the geographical position of Palestine. During AD 70 and AD 135 Jews were driven out of Israel by Romans, they were then forbidden to live in Israel and tried to settle wherever they could. ...read more.

The occupation of Palestinian land which is being taken away for use of Israeli roads is concerning for Palestinians and they would feel a loss of pride due to this. A number of peace treaties have been arranged for both groups, most of which Israelis have broken; these are named Oslo, Camp David and The Road Map. Camp David was appointed in 1947 to achieve peace in the Middle East. It aimed for Palestinians to govern themselves for 5 years and for Israeli troops to withdraw from Arab areas. Israel, Egypt, Jordan and Palestinian representatives who would also decide how Gaza and The West Bank should be ruled made this peace treaty. But during the 1970's and 80's Israel still occupied Palestine on West Bank and Gaza. Their claim was it was their land as stated in the bible. On the other hand Palestinians broke none of the agreements. The Oslo Accords was finalized in Norway, 1993 and involved Jordan, Syria, Lebanon and Palestinian representatives. This aimed to divide the Gaza and West bank into three main areas. Area A received full Palestinian authority, Area B received Palestinian civil control by Israeli security control and Area C claimed full Israeli control except over Palestinian civilians. Both Israelis and Palestinians agreed to stop violence and terrorism, Israelis agreed to withdraw troops from Palestinian territories. ...read more.

Taking all of the above into consideration the most prominent incentive for Palestinians to act out any acts of terrorism would be the bad treatment by Israelis. The Israelis have throughout the conflict treated the Palestinians in an appalling manner, Israelis have broken all three peace treaties of Camp David, The Oslo Accords and The Road Map and in turn have extended territories, tightened restrictions and made a number of military attacks killing many civilians. As a resort of this Palestinians have little homeland and are afraid to return to homes, Israel also refuses to talk to the Palestinian government; this bad treatment has started by the occupation of unlawful land and if Israelis did not occupy land there would be no issue of broken peace treaties and nor would Palestinians retaliate. Another key point to be taken aboard is that both government Palestinian political parties don't mind dividing up Jerusalem in to two sections providing they receive East Jerusalem because that where Haram al-Sharif is. Israelis however do not want to do this and want an Israeli state only. The Hamas party too would not have been formed if it wasn't for the colossal amount of military attacks upon Israel and the conflict may have been resolved by now if it was not for the egocentric attitude of Israel. This concludes that the most important factor for Palestinians to resort to terrorism Is the bad treatment by Israelis although all are linked together closely. ?? ?? ?? ?? Jaspreet Garcha ...read more.