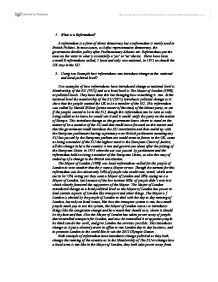 1. What is a Referendum? A referendum is a form of direct democracy but a referendum is rarely used in British Politics. In most issues, as befits representative democracy, the government decides policy after Parliamentary debates etc. Referendums put the onus on the voter in what is essentially a 'yes' or 'no' choice. There have been overall 8 referendums called, 7 local and only one national, in 1975 on should the UK stay in the EU. 2. Using two Example how referendums can introduce change at the national and local political level? Two examples of how referendums have introduced change at national level is Membership of the EU (1975) and at a local level is The Mayor of London (1998) at political levels. They have done this but changing how something is ran. At the national level the membership of the EU (1975) introduces political change as it show that the people wanted the UK to be a member of the EU. This referendum was called by Harold Wilson (prime mister of the time) of the labour party, to see if the people wanted to be in the EU, though this referendum can be seen as only being called as he know he would win it and it would unify the party on the matter of Europe. This introduce change as the government know where to stand on the matter of be a member of the EU and that could move ...read more.

Some of the arguments against the use of referendums are that referenda are inconsistent with the belief in parliamentary sovereignty, issues might be too complex for a mere yes/no vote or for the public to understand, the regular use of referenda could lead to apathy among the public and there are effective alternatives opinion polls and by-elections. The arguments in favour of using referendums are that it is the real form of direct democracy as everyone whom the issues in the referendum affects and every one who can vote get a chance to vote, to a chance to voice there opinion the matter in hand, be it local or national issues. Also that referendums increase political participation as every one (who can vote) gets a direct say in the issues in hand, the issues of why the referendum has been called, and if you are against the issues you can vote no and the same as if you are for the issues you can vote yes. Voting does not take place just every five years this can be in favour of referendums as, the government calls the referendum, or local government calls a referendum and if you are against there view you have the chance outside a general election to say no. Referenda can be a check on "elective dictatorships" during a government's 5 years span as if can see if the people are still to favour of the government and still like there view on how the country should be run. ...read more.

How are these safeguarded? Which turn out meaning that the government if it makes the wrong move will the less the support of people or not. These are the agreements against the use of referendums. The uses of referendum are both good and bad as you have to take into account that it is the form of direct democracy if you can vote you got a chance to say yes or no to the government and the issue in hand. However if referendums are being used all the time by the government to see what the people think this could cause voter apathy and end up having very low turn outs. It is a fine line of when and how to use referendums, as if the government gets it write they get what they want and they may even gain more support, but if that get in wrong they could lose the referendum lose support and even a general election. The evolution of referendums is that they should be used but only on the big issues that will effect every person in the country and only a few, big issues like the Membership of the EU, things like that, that effect everyone and everyone should get a say if they should or should not, and not allowing to the MP's to vote on it. Referendums are a good thing if they are used at the right time on the right issues. ...read more.