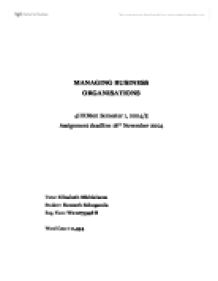 Select any ONE U.K.trade union. Explore their current levels of membership, and services for members and critically examine theoretical analysis for this current position and activity within the Employee Relations literature.

MANAGING BUSINESS ORGANISATIONS 4HRB601 Semester 1, 2004/5 Assignment deadline 18th November 2004 Tutor: Elizabeth Michielsens Student: Kenneth Sebuganda Reg. Num: W01073548 B Word Count: 2,434 Select any ONE U.K. trade union. Explore their current levels of membership, and services for members and critically examine theoretical analysis for this current position and activity within the Employee Relations literature. Before I begin there are two necessary elements that must be covered differentiated, although greatly related to each other they are differences between the two: Trade Unions can be defined as "a continuous association of wage earner for the purpose of maintaining or improving the conditions of their working lives" (cited Webb & Webb, 1920)1. Employee Relations can be defined as "concerned with the relationship between the policies and practices of the organisation and it staff, and the behaviour of work groups." (Mullins 2002) The trade union I have chosen to examine is Amicus, the UK's largest manufacturing, technical & skilled persons' union. With over 1.2 million members in the private & public sectors, a major industrial force since the merger of MSF & AEEU into a single collective body. A series of mergers began during the late 80's and early 90's, as smaller unions feared that they would lose the little power they possessed and larger trade unions continued to absorb smaller ones in the private sector. ...read more.

The challenges now for the UK companies come not only from European market competitors but also the increasing competitive Asian & Oriental markets, whom not only focusing on high-quality production and service products but compete strongly on price. The UK workforce similarly to American and Canadian workforces are moving away from manufacturing based employment to greater service oriented organisations, in essence the UK has become a service based economy export the industrial age to other countries. A factor covered very strong in Naomi Klein's No Logo in which she explores the euphoria behind Globalisation. Klein claims that many company such as Ford, Nike, IBM, Marks & Spencers, etc are finding that the try value of the company is judged through branding and increasing many of the top globalised organisation are outsourcing or contracting the production of their products6. Globalisation has been a major thorn in the trade union survive as modern communications and information technologies has made it possible for global sourcing, for example, labour or wage intensive production can be transferred to other countries, and the increased pressure exerted by the labour markets in the East, has influenced the multi-national companies i.e. to move their call centres in the UK to Delhi or the increased purchase of cheaper raw material in Eastern European. These kinds of actions leave trade unions with little room to manoeuvre, as the companies are willing to threaten and in many cases have move entire production processes to other countries (also known as Job Flight) ...read more.

Dave Lyddon cites that "increasingly Europe (rather than the British government) is the source of most individual employment rights, such as the Working Time Directive (with its right to paid holidays), health and safety law, and rights to consultation"12. What is increasing worrying is that in many case of services outsourcing trade union have little they can do about such action and member are left powerless. With the increase in part time and contract employment younger workers, i.e. those under 35 are not valuing the membership of trade unions. This is something that trade unions must aim to tackle in order to command greater respect form the globalised community. A question also raised by theorist such as Weber & Weber is "are trade unions actually good or bad for an economy"13, they refer to the effects of a reduced influence by trade unions, leading to multi-skilled workers with in the remaining factories, the increase of women with construction and manufacturing sectors, the improved competitiveness of UK businesses in the World market due to avoidance of excessive wage demands and a reduction in the number of days lost due to industrial disputes. This question can be countered with "what about those who are left in vulnerable positions?" issues which the European legislation is quick to support and attended to. So it can be said that trade union are by no means a way of the past but that their roles have grown in flexibility with ever changing boundaries. ...read more.