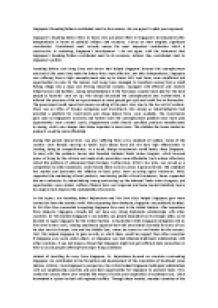 Singapores founding fathers contributed most to its economy. Do you agree? Explain your argument.

﻿Singapore?s founding fathers contributed most to its economy. Do you agree? Explain your argument. Singapore?s founding father refers to those who put great effort in Singapore?s development after independence in terms of political, military and economy. I focus on their tangible, significant contribution. ?Contributed most? actually means the most important contribution which is constructive in sustaining Singapore?s development. I do not agree with the statement that Singapore?s founding fathers contributed most to its economy. Instead, they contributed most to Singapore?s politics. Founding fathers Goh Keng Swee and Devan Nair helped Singapore lowered the unemployment rate and at the same time make the labour force more effective. Just after independence, Singapore was suffering from a high unemployment rate up to about 15%, and there were insufficient job opportunities to cater to the masses. Goh Keng Swee managed to transform Jurong from a small fishing village into a large and thriving industrial complex, equipped with efficient and modern infrastructure and facilities. Jurong Industrialisation in the first place created more jobs for the local people as factories were set up. This sharply decreased the unemployment rate. Furthermore, it relieved the pressure of the new government as more people got a job and could live on themselves. ...read more.

After separation from Malaysia, Singapore virtually did not have any strong diplomatic relationships with other countries. Dr Toh realized Singapore?s survivability was greatly depended on its stronger allies, so he decided to apply Singapore for the United Nations. In September 1965, Singapore delegation led by him went to New York, winning unanimous approval from the UN General Assembly for entry of UN. He also went to Europe, Asia and the Middle East, where he strove to win friends for the country. First, this helped Singapore to gain security in which there would be support from other countries if Singapore ever came under attack. As Singapore was had obtained diplomatic relationships with other countries, it was not longer a threat that Singapore might not get sufficient daily necessities on their own and people suffering from abject living conditions. Instead of travelling far away from Singapore, Dr. Rajaratnam focused on countries surrounding Singapore. He contributed to the formation and development of the Association of Southeast Asian Nations (ASEAN). From Singapore?s perspective, the ASEAN helped Singapore build good relationships with our neighbouring countries and provided opportunities for Singapore to promote trade. ...read more.

Building up defence force stabilise the society as Singapore became less vulnerable and could focus on the development of other aspects. From the observation above, the military reform was critical in Singapore?s development. Although Singapore is now recognized as its magnificent economic achievements, economic contribution is not the most important contribution compared to other aspects. On the other hand, Singapore?s founding fathers contributed most to its politics. By gaining diplomatic relationships with other countries, Singapore could join with militarily strong allies to protect Singapore. Without their support, Singapore would still be easily conquered despite the implementation of National Service due to the big difference in population. Also, foreign investments could enter Singapore freely after the bilateral relationship was set up. More jobs could be created to improve Singapore?s economy. Furthermore, by signing trade agreements and other agreements, Singapore?s trade income would increase and the tax for goods to be sold abroad would be lowered. Without those benefits, Singapore?s economy might have been stagnated and would have not been flourished now.Hence, political contribution is what Singapore?s founding fathers contributed most. In conclusion, Singapore?s founding fathers contributed most to its politics. As other contribution in other aspects would not succeed without the foundamental base of political achievements, political contribution is the most important and to the greater extent help Singapore sustain its development. ...read more.