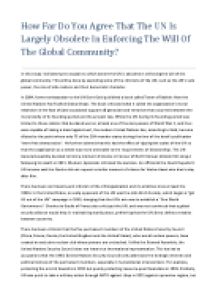 How Far Do You Agree That The UN Is Largely Obsolete In Enforcing The Will Of The Global Community?

﻿How Far Do You Agree That The UN Is Largely Obsolete In Enforcing The Will Of The Global Community? ________________ In this essay I will attempt to explain to which extent the UN is obsolete in enforcing the will of the global community. This will be done by exploring some of the criticisms of the UN, such as the UN?s veto power, the role of elite nations and their democratic character. In 2004, former ambassador to the UN Dore Gold published a book called Tower of Babble: How the United Nations Has Fuelled Global Chaos. The book criticized what it called the organization's moral relativism in the face of (and occasional support of) genocide and terrorism that occurred between the moral clarity of its founding period and the present day. While the UN during its founding period was limited to those nations that declared war on at least one of the Axis powers of World War II, and thus were capable of taking a stand against evil, the modern United Nations has, according to Gold, become ...read more.

This has led to accusations that the UNSC (United Nations Security Council) only addresses the strategic interests and political motives of the permanent members, especially in humanitarian interventions. For example, protecting the oil-rich Kuwaitis in 1991 but poorly protecting resource-poor Rwandans in 1994. Similarly, UN was quick to take a military action through NATO against Libya in 2011 against repressive regime, but as of September 2012 it still hasn't taken any decision on whether to take any action against Syria. Another criticism of the Security Council involves the veto power of the five permanent nations. As it stands, a veto from any of the permanent members can halt any possible action the Council may take. One nation's objection, rather than the opinions of a majority of nations, may cripple any possible UN armed or diplomatic response to a crisis. For instance, John J. Mearsheimer, (a neorealist) claimed that "since 1982, the US has vetoed 32 Security Council resolutions critical of Israel, more than the total number of vetoes cast by all the other Security Council members." ...read more.

Critics of the UN argued that the UN was completely ineffective in preventing the genocide, and that military intervention by India was the only thing to stop the mass murder. Another such case occurred in the Srebrenica massacre where Serbian troops committed genocide against Bosnian Muslims in the largest case of mass murder on the European continent since World War II. Srebrenica had been declared a UN "safe area" and was even protected by 400 armed Dutch peace keepers, but the UN forces did nothing to prevent the massacre. In the 21st century, the most prominent and dramatic example is the Darfur crisis, in which Arab Janjaweed militias, supported by the Sudanese government, committed repeated acts of ethnic cleansing and genocide against the native population. This far, an estimated 300,000 civilians have been killed in what is the largest case of mass murder in the history of the region, yet the UN has continuously failed to act against this severe and on-going human rights issue. Also, in 1967, Richard Nixon, while running for President of the United States, criticized the UN as "obsolete and inadequate" for dealing with then-present crises like the Cold War. ...read more.