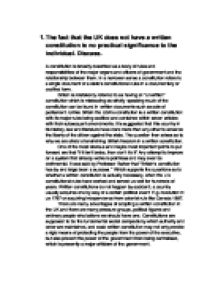 The fact that the UK does not have a written constitution is no practical significance to the individual. Discuss.

1. The fact that the UK does not have a written constitution is no practical significance to the individual. Discuss. A constitution is broadly described as a body of rules and responsibilities of the major organs and officers of government and the relationship between them. In a narrower sense a constitution refers to a single document of a state's constitutional rules in a documentary or codified form. Britain is mistakenly referred to as having an "unwritten" constitution which is misleading as strictly speaking much of the constitution can be found in written documents such as acts of parliament. Unlike Britain the USA's constitution is a written constitution with its major rules being codified and contained within seven articles with their subsequent amendments. It is suggested that this country in its history, law and literature have done more than any other to advance the liberty of the citizen against the state. The question then arises as to why we are afraid of enshrining British freedom in a written constitution. One of the most obvious and maybe most important points to put forward are that "if it isn't broke, then don't fix it" Any attempt to improve on a system that already works is pointless and may even be detrimental. ...read more.

Which acts as one of the UK's constitutional rules therefore this is a disadvantage of adopting a written constitution as it clearly shows we may not have our constitution in a single document but it does exist. Although parliament still remains supreme in the UK and could technically repeal this legislation at any time, we might better the individuals by the incorporation of these within a written constitution. Where it cannot be repealed or amended like the ordinary statue law by a simple majority vote in parliament. Therefore a written would be advantageous in protecting the individual's rights and liberties against the state. In conclusion a written constitution can be seen as a far more advantageous way of setting out and clarifying the rules and regulations of a state, but it is only appropriate at the right time and in the right circumstances. It can be said that most people in the UK aren't aware of what a constitution is, and although some may argue that a public insight into politics may be achieved by a written constitution many would oppose this happening. Britain's present successful judicial system and democratic parliament has remained stable and has a reasonable government for years, why risk detriment to the country if the codified form of a constitution does not necessarily play a part in its effectiveness. ...read more.