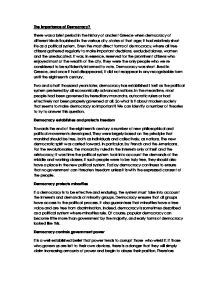 The importance of democracy

The Importance of Democracy? There was a brief period in the history of ancient Greece when democracy of different kinds flourished in the various city-states of that age; it had relatively short life as a political system. Even the most direct forms of democracy, where all free citizens gathered regularly to make important decisions, excluded slaves, women and the uneducated. It was, in essence, reserved for the prominent citizens who enjoyed most of the wealth of the city. They were the only people who were considered to be sufficiently informed to vote. Democracy was short-lived in Greece, and once it had disappeared, it did not reappear in any recognisable form until the eighteenth century. ...read more.

The new democratic spirit was carried forward, in particular, by French and the Americans. For the revolutionaries, the monarchy ruled in the interests only of itself and the aristocracy; it was time the political system took into account the demands of the middle and working classes. If such people were to be truly free, they should also have a place in the new political system. Today democracy continues to ensure that no government can threaten freedom unless it is with the expressed consent of the people. Democracy protects minorities If a democracy is to be effective and enduring, the system must take into account the interests and demands of minority groups. Democracy ensures that all groups have access to the political process. ...read more.

The alternative to democracy is a form of politics were decisions are made without reference to the people, where governments are not accountable to the people and where there are no guarantees that individuals and minorities will be protected. Democracy encourages popular participation As it is commonly believed that tyranny can be prevented by ensuring that the people are able to participate freely in politics, democracy is critical in ensuring the prevention of such tyranny. In a free democracy the people have the opportunity to become informed and be directly involved in influencing decision making. A docile and uninformed population is vulnerable to autocratic government. Democracy can prevent such a situation arising, helping to ensure that citizens remain fully involved. ...read more.