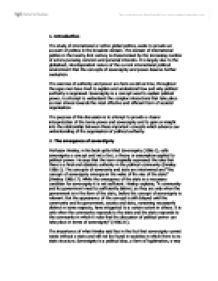 The study of international or rather global politics, seeks to provide an account of politics in the broadest domain.

1. Introduction The study of international or rather global politics, seeks to provide an account of politics in the broadest domain. The domain of international politics in the twenty-first century is characterised by the increasing number of actors pursuing common and personal interests. It is largely due to the globalised, interdependent nature of the current international political environment that the concepts of sovereignty and power deserve further evaluation. The exercise of authority and power are facts as old as time, throughout the ages men have tried to explain and understand how and why political authority is organised. Sovereignty is a concept used to explain political power, to attempt to understand the complex interactions that take place as man strives towards the most effective and efficient form of societal organisation. The purpose of this discussion is to attempt to provide a clearer interpretation of the terms power and sovereignty and to gain an insight into the relationship between these important concepts which advance our understanding of the organisation of political authority. 2. The emergence of sovereignty Porfessor Hinsley, in his book aptly titled Sovereignty (1986:1), calls sovereignty a concept and not a fact, a theory or assumption applied to political power. He says that the term originally expressed the idea that there is a final and absolute authority in the political community (Hinsley 1986:1). The concepts of sovereinty and state are intertwined and "the concept of sovereignty emerges in the wake of the rise of the state" (Hinsley 1986:17). While the emergence of the state is a necessary condition for sovereignty it is not sufficient. Hinsley explains, "A community and its government must be sufficiently distinct, as they are only when the government is in the form of the state, before the concept of sovereignty is relevant. But the appearance of the concept is still delayed until the community and its government, society and state, remaining necessarily distinct in some respects, have integrated to a certain extent in others. ...read more.

The existence of a common power is a precondition for the existence of law and the need for a common authority is based firstly on "the need to direct actions for common benefit" and secondly to compel men to order in fear of punishment. Hobbes, like Machiavelli, has a very cynical approach to the nature of mankind and he believes that force is a very important tool of governance. "Covenants, without the sword, are but words, and of no strength to secure a man at all. The bonds of words are too weak to bridle men's ambition, avarice, anger, and other passions, without the fear of some coercive power". Hobbes' view was that the only way to create a common power to "defend them from the invasion of foreigners, the injuries of one another, to secure them and their own industry so that they may nourish themselves and live contentedly", is to confer all power and strength to one man or an assembly of men. As Sabine (1973:433) explains, "Security depends upon the existence of a government having the power to keep the peace and to apply the sanctions needed to curb man's innately unsocial inclinations. The effective motive by which men are socialized is the fear of punishment, and the authority of law extends only so far as its enforcement is able to reach". This covenant between subjects and the authority is the key to the creation of a sovereign state. This covenant involves a transfer of power and a certain sacrifice of personal liberties, from the individual to a central, common authority and in exchange for submitting to the will and power of the sovereign, the individual gains security and order. According to Sabine (1973:432), the power of the state and the authority of the law are justified only because they contribute to the security of the individual, and there is no rational ground of obedience and respect for authority except the anticipation that these will yield larger individual advantage than their opposites. ...read more.

Hinsley believes that the purpose of these efforts is not the establihnment of a higher political authority and the dissolution of the sovereignty of states, but rather that "they are exercising their sovereignty to bring about an agreed re-definition of their rights and duties within the international system" (Hinsley 1986:229). In Robert Gilpin's analysis of change in world politics entitled War and Change in World Politics, he discusses political change as a product of changes in power relationships. He explains that "those actors who benefit most from a change in the social system and who gain the power to effect such change, will seek to alter the system in ways that favor their interests. The resulting changed system will reflect the new distribution of power and the interests of its new dominant members" (in Viotti & Kauppi 1993:147). In other words, the political system changes to reflect shifts or is changed by shifts in interest and power. 8. Conclusion Much the same as in post-medieval Europe, there was a re-evaluation and re-organisation of political authority, there is scope for philosophers and theorists to question the continued existence of sovereignty and the ability of a sovereign to exercise power. The concepts of sovereignty and power are so closely tied to each other and dependent upon one another, that a re-organisation of political authority will in fact lead to a complete change in the language of politics. The sovereign state has been a characteristic of the international political order for the past three hundred years and has evolved out of a necessity or propensity for order. A sovereign excerises its power through the creation and maintenance of order and the provision of security. The power of the state to act as a sovereign is continually being challenged by forces such as globalisation, terrorism and regionalism and the continued existence of a sovereign nation-state lies in its effectiveness as an actor and its ability to be an actor in the international community is dependent upon the power structure of the international arena. ...read more.