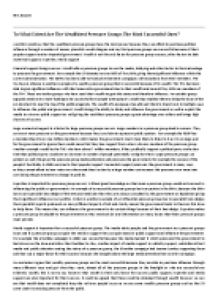 ﻿Ben Jacques ________________ To What Extent Are The Wealthiest Pressure Groups The Most Successful Ones? An elitist would say that the wealthiest pressure groups have the most power because they can afford to purchase political influence through a number of means, pluralists would disagree and say that pressure groups are successful because of their popular support and an impartial government. Wealth is not the only factor for pressure group success; other factors include numerical support, expertise, media support Financial support brings success. Wealth allows pressure groups to use the media, lobbying and other tactics to their advantage to pressure the government. For example the CFI donates to over 80% of Tory MPs giving them significant influence within the current administration. The NSPCC has been able to fund advertisement campaigns with donations from their members. The Tax Payers Alliance is another example of a wealthy pressure group that is successful because of its wealth. ...read more.

it as it is so large and for the government to ignore them could mean that they lose support from voters who are members of the pressure group. Another example would be the TUC who have about 7 million members, if they publically support a political party at election time that political party would see an increase in number of people potentially voting for them. Large pressure groups can protest as well, this gives the pressure group media attention and pressures the government, for example the success of the people's fuel lobby in 2000 was due to their popular support. Numerical support pressures the government in many ways as they cannot afford to lose votes over them and direct action by a large number can increase this pressure even more into convincing the government to change its policies. Expertise is important for pressure group success. Without good knowledge on their area a pressure group would not succeed in influencing the public or government. ...read more.

Another aspect of media support is celebrity support, celebrities attract media and public attention raising the status of a pressure group, the Ghurkha campaign had Joanna Lumley supporting them and that was a major factor for their success because she brought about the large media attention that won her campaign. In conclusion I agree that wealthy pressure groups are the most successful because they are able to purchase influence through many different ways and get what they want, almost all of the pressure groups in the limelight or who are successful are evidently wealth, this is not to say however that wealth is their only factor for success public support, expertise and media support are also important for their success. It could be argued that these could be obtained through wealth however we can see that wealth does not completely drop the veil over people?s eyes as we see some wealthy pressure groups such as the CFI come under increasing pressure from the public. ...read more.