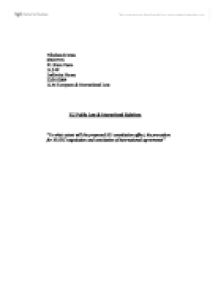 &quot;To what extent will the proposed EU constitution affect, the procedure for EU/EC negotiation and conclusion of international agreements&quot;

Nikolaos Ktenas 03019776 Pr. Steve Peers LL34P Ladbroke House 22/01/2004 LLM European & International Law EU Public Law & International Relations "To what extent will the proposed EU constitution affect, the procedure for EU/EC negotiation and conclusion of international agreements" Whilst some of the European Union's relations with international organizations have political or humanitarian roots, the vast majority is economic and relates to the organisation of the world economy. According to the founding Treaties each of the Communities has the capacity to establish relations with certain international organisations and to conclude certain types of international agreements The most important of these economic organisations that have engaged with the EC since the early years of its existence, are: the International Monetary Fund (IMF), the International Trade Organisation (ITO) and the General Agreement on Tariffs and Trade (GATT) and since 1994 the World Trade Organisation (WTO). My analysis will begin by examining the law as it stands according to the articles of the Treaties and case law. This will include a closer look on some established cases that made the EU set up the standards under the proposed constitution. There are three types of international agreements capable of being invoked in the context of EC law, arising from the Community's powers under Articles 281, 300,133 as we have already noted and finally Art 310 (ex Art 210, 228,133 and 238 EC). First there are agreements which have been concluded by the Community institutions and fall within the treaty making jurisdiction of the European Community. Secondly there are hybrid agreements, like the WTO agreements in which the subject matter lies partly within the jurisdiction of MS and partly within the EC' jurisdiction. Finally there are agreements which have been concluded prior to the EC Treaty and the EC has assumed that there are inside its jurisdiction, by way of succession, like GATT agreements. There have been an enormous amount of cases reaching the ECJ the last thirty or so years, where the main issue had been ...read more.

was a dynamic concept which expanded over time and must include international trade in services and trade issues in intellectual property, but that was not the view of the Courts that decided against the exclusive competence of the EC on services and intellectual property agreements. EC Art 133 (ex Art 113) was amended in the Treaty of Nice in 2000 on the CCP in order to extend its provisions to the negotiation and conclusion of agreements in the fields of trade in services and the commercial aspects of intellectual property. Paragraph 6 of the amendment contained two limitations to the Community's powers; where trade agreements with third countries or international organisations have to be negotiated, the Commission can make recommendations to the Council, which in turn authorises the Commission to open negotiations. The mandate and the directives require a decision by a qualified majority of the Council. Powers in that regard are limited in that it cannot conclude agreements going beyond the internal power of the EC. Secondly, while most of the Common Commercial Policy agreements lay within the exclusive competence of the Community, paragraph 6 of the amendments recognises a list of international trade agreements, such as those relating to education, cultural, social and health services, should be concluded by the Member States and the Community together. The general thrust of these amendments was to return the control of Community trade policy back to the Council, hence, in effect to the Member States. In concluding the major effect of the revised Art 133 has been the restriction on Commission's power to negotiate international agreements on the Community's behalf. As it can be seen from the above, the EU has not set out a common procedure policy for the institutions to follow; rather it leaves it upon the Treaties to provide Articles stating the procedure needed, according to the nature of the agreement. Article 252 (ex Art 189c) ...read more.

It may also address negotiating directives to the Union's negotiator and may designate a special committee in consultation with which the negotiations must be conducted. On a proposal from the negotiator, the Council of Ministers shall adopt a European decision authorising the signing and agreement and, if necessary, its provisional application. The Council of Ministers shall adopt a European decision concluding the agreement on a proposal by the agreement negotiator. At the same time through the derogative powers of the proposed EU Constitution to the Council of Ministers, the latter can authorise its negotiator to approve on the Union's behalf modifications to the agreement where it provides for them to be adopted by a simplified procedure or by a body set up by the agreement. The principle of qualified majority throughout the procedure remains the same. The Constitution also provides that the Council will only have to act unanimously when the agreement covers a field for which unanimity is required for the adoption of a Union act as well as for association agreements and for Union accession to the European Convention for the Protection of Human Rights and Fundamental Freedoms. 10. The Council of Ministers, on a proposal from the Union Minister for Foreign Affairs or the Commission, shall adopt a European decision suspending application of an agreement and establishing the positions to be adopted on the Union's behalf in a body set up by an agreement, when that body is called upon to adopt acts having legal effects, with the exception of acts supplementing or amending the institutional framework of the agreement. 11. The European Parliament shall be immediately and fully informed at all stages of the procedure. 12. A Member State, the European Parliament, the Council of Ministers or the Commission may obtain the opinion of the Court of Justice as to whether an agreement envisaged is compatible with the provisions of the Constitution. Where the opinion of the Court of Justice is adverse, the agreement envisaged may not enter into force unless it is amended or the Constitution is revised in accordance with the procedure laid down in Article IV-6. ...read more.