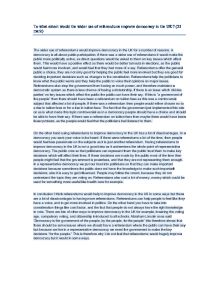 If there was a referendum on tuition fees then maybe there would have been fewer protests, as the people would feel that the politicians had listened to them. On the other hand using referendums to improve democracy in the UK has a lot of disadvantages. In a democracy you want your voice to be heard. If there were referendums a lot of the time, then people would feel less passionate on the subjects as it is just another referendum. Having referendums to improve democracy in the UK is not a good idea as it undermines the whole point of representative democracy. The public vote so that politicians can represent them the public trust them to make key decisions which will affect their lives. ...read more.

Referendums can help people to feel like they have a voice, and to get more involved in politics. On the other hand you have to take into consideration things like cost factor, and the fact that people do not always have the right knowledge to vote. There are lots of other ways to improve democracy in the UK for example, lowering the voting age, compulsory voting, and citizenship introduced to all schools. Abraham Lincoln once said "Democracy is the government of the people, by the people, for the people" this therefore shows that there should be some issues where we should have a referendum where the public can have their say but because we live in a representative democracy we need the government to make the key decisions "for the people." This is therefore why I do not feel that referendums would hugely improve democracy but it would in some ways. ...read more.