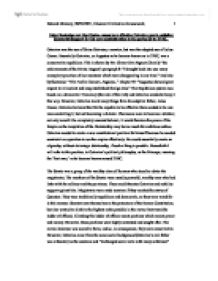 Using Suetonius and Res Gestae, assess how effective Octavian was in enlisting Senatorial Support for his new administration in the period 30 to 19 BC.

Using Suetonius and Res Gestae, assess how effective Octavian was in enlisting Senatorial Support for his new administration in the period 30 to 19 BC. Octavian was the son of Gaius Octavius, a senator, but was the adopted son of Julius Caesar. Essentially Octavian, or Augustus as he became known as in 27BC, was a conservative republican. This is shown by Res Gestae Divi Augusti (literally 'the achievements of the Divine August') paragraph 8: "I brought back into use many exemplary practises of our ancestors which were disappearing in our time." And also by Suetonius' "The Twelve Caesars, Augustus," chapter 93: "Augustus showed great respect to all ancient and long established foreign rites." The Republican system was based on a democratic Timocracy (the rule of the rich) and Octavian needed to keep it this way. However, Octavian learnt many things from his adoptive father, Julius Caesar. Octavian believed that for the republic to be effective there needed to be one man controlling it, but not becoming a dictator. If someone were to become a dictator, not only would it be completely unconstitutional, it would threaten the peace of the Empire as the temptation of the Dictatorship may be too much for ambitious nobles. Octavian needed to create a new constitutional position for himself because he needed senatorial co-operation to run the empire affectively. He would essentially create an oligarchy, without claiming a dictatorship, if such a thing is possible. Henceforth I will refer to this position, in Octavian's political philosophy, as the Princeps, meaning the 'first man,' as he became known around 23BC. The Senate was a group of the wealthy class of Romans who stood to advise the magistrates. ...read more.

An example of this is when Octavian creates a Senate committee that proposed business to be submitted to the Senate. This Senate committee gave Octavian the power to have control over what decrees were put to the Senate. He also makes it easier for the senators to fulfil their duties- he decreed that "meetings should not be held more than twice a month ... no member need attend accept those...needed to provide a quorum." (Suetonius 35). He restores the dignity and respect of the Senate by encouraging them to speak freely and pray before the proceeding took place. However, the Senate's proceedings had been censored by Augustus because of the Senate committee that he chaired. Due to the increasing amount of absentee Senators, Augustus (formerly Octavian) had to increase fines in 17BC and 9BC. Senators were also not allowed to leave Italy without permission. In order to preserve its exclusive nature, and to strengthen the social hierarchy, a property qualification was introduced: "The property qualification was now increased from 8000 to 12000 gold pieces" (Suetonius 41) but Octavian gave sufficient money to Senators that he deemed worthy of this privilege. In 27BC Octavian decided that he wanted to normalize his position in the Roman Constitution. He renounced his powers and placed them in the hands of the Roman people and Senate. This was why he revised the senatorial list- he needed the support in the Senate. The Senate protested (a premeditated response) and granted him proconsular imperium (supreme executive authority) for ten years. He was given the name 'Augustus' (means 'one to be revered') and I shall henceforth refer to him in this manner. ...read more.

and 'one to be revered' (Augustus) by the Roman people. He had control over everything, but he did not advertise it. He had the ability to change the responsibilities of Magistrates. He had control over the security of the Empire- after all; his generals had the last word in peace or war so he had to have had control over the treaties. He also had to pay for his troops, so he had control over taxation. He had the power of a Consul and a Tribune. His Tribuneship gave him power to veto laws, propose laws and attack political rivals in a court of law. The consulship gave him power to command armies, authorise public spending and, with the power of Pontifex Maximus (Head of Roman Religion in 12BC), read the auspices. As you can see, Augustus had some degree of control over every aspect of the Roman Constitution. The Roman people saw this also. They made him into a god, and possibly changed his birth date so it coincided exactly with the Catilinarian Conspiracy where Julius Caesar was threatened with death in the Senate (Suetonius, Julius Caesar, 14). Augustus had secured Pax Romanus for 20 years by pleasing the upper classes using a fa�ade of constitutional positions and by not changing things too dramatically or controversially. This was the ultimate gift to the Senators because they could become rich, secure, have honour and pursue political careers again. In contrast with their former position, during the times of Sulla and Caesar, the senators were superior. Even through they were controlled by Augustus, they still had the respect of the people and they had status. Everything they desired, they had. Everything that Augustus needed control of, he had at least a say in. In this way, Augustus was very effective in his dealings with the senate during his new administration. ...read more.