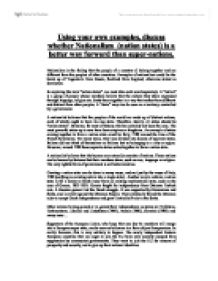 Using your own examples, discuss whether Nationalism (nation states) is a better way forward than super-nations.

Using your own examples, discuss whether Nationalism (nation states) is a better way forward than super-nations. Nationalism is the feeling that the people of a country all belong together and are different from the peoples of other countries. Examples of nationalism could be the break up of Yugoslavia from Russia, Scotland from England, otherwise stated as devolution. In exploring the term "nation states", we must take each word separately. A "nation" is a group of people whose members believe that the culture they share expressed through language, religion etc. binds them together in a way that makes them different and distinct from other peoples. A "state" may also be seen as a territory, controlled by a government. A nationalist believes that the peoples of the world are made up of distinct nations, each of which ought to have its own state. Therefore, ideally, all states should be "nation states". ...read more.

Greece fought for independence from Ottoman Turkish rule. A Russian general led the Greek struggle. It was supported by Romanians and Serbs, also in revolt against the Ottoman Empire. They eventually forced the Ottoman ruler to accept Greek independence and grant limited self-rule to the Serbs. Other nations having gained or re-gained their independence as states are Tajikistan, Turkmenistan, Ukraine and Uzbekistan (1991), Bosnia (1992), Slovakia (1993) and many more... Supporters of the European Union, who hope that one day its members will merge into a European super state, can be seen as believers in a form of pan-Europeanism. In reality however, this is very unlikely to happen. The newly independent Eastern European countries that are eager to join the EU have only recently escaped from suppression by communist governments. They want to join the EU for reasons of prosperity and security, not to give up their national identities. Sociologists believing is state centred theories are Skocpol and Nordlinger. ...read more.

In studying bodies such as the EU, we see that countries are unifying to form this super-nation. The European Union is an institutional framework for the construction of a united Europe. It was created after World War II to unite the nations of Europe economically so another war among them would be unthinkable. Twenty-five countries are members of the European Union. The aims of the EU include the expansion of trade, reduction of competition, the abolition of restrictive trading practices, the encouragement of free movement of capital and labour within the alliance, and the establishment of a closer union among European people. I personally feel that nationalism is a thing of the past. With a lengthy list of countries having gained or re-gained their own independence, is there really many more countries that can do this? With most countries having gained independence, the way forward is to unite with others forming a super nation such as the EU. Although super nations do have there disadvantages such as the members losing developed identity, the advantages such as the ones stated above do out count the disadvantages. Stuart Small. ...read more.