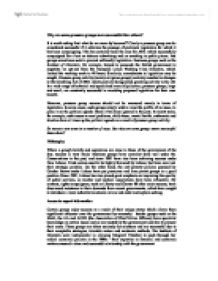 Why are some pressure groups more successful than others? It is worth asking first: what do we mean by 'success'? Clearly a pressure group can be considered successful if it achieves the passage of particular legislation for which it has been campaigning. This has certainly been the case for ASH, which successfully campaigned for a ban on tobacco advertising and on smoking in public places. But groups sometimes seek to prevent unfriendly legislation. Business groups such as the Institute of Directors, for example, helped to persuade the British government to negotiate an opt-out from the European Union Working Time Directive, which limited the working week to 48 hours. Similarly, amendments to legislation may be sought. Pressure group activity (mainly religious groups) certainly resulted in changes to the Gambling Act of 2005, which partially deregulated gambling activity in the UK In a wide range of technical and specialised areas of policy too, pressure groups, large and small, are constantly successful in moulding proposed legislation for their own benefit. However, pressure group success should not be measured merely in terms of legislation. In some cases, such groups simply wish to raise the profile of an issue, to place it on the political agenda where it has been ignored in the past. In recent years, for example, such issues as rural problems, child abuse, mental health, euthanasia and abortion have all risen up the political agenda as a result of pressure group activity. ...read more.

Turnout among pensioners is usually 70-80 per cent, compared with less than 40 per cent among the under-thirties. Of course, there is no guarantee that a large pressure group will be successful. As we have seen, trade unions have fallen out of favour with governments from both parties, so even the biggest unions, such as UNISON (1.2 million members working in the public services) and AMACUS (1.1 million general workers), do not 'punch their weight' in political circles as they used to do before the 1980s. Organisation, leadership and membership The ability of a group to organise successful demonstrations, to raise its public profile and to persuade its members to take visible action, can replace both size and finance as factors in success. The Countryside Alliance, Fathers4Justice and Live Aid are all examples of movements that have been successful because they have been well led and have captured the imagination of the public and the media. Images of these and other similar groups appear regularly on our TV screens. Careful planning and organisation are behind their successes. The quality of a pressure group's organisation and leadership is clearly an important factor. Pressure groups with a strong and logical organisational structure tend to be more effective, and it is often those that take advantage of an issue gaining sudden prominence that are then able to achieve success. ...read more.

One well-placed individual or one useful photo opportunity, can replant huge amounts of finance and public support in terms of influence. Indeed, in 2004-05 celebrity chef Jamie Oliver single-handedly won a commitment from government to provide more funding for school meals. Elton John has campaigned for many years on behalf of AIDS charities, Princess Diana raised awareness of the victims of landmines and Bob Geldof has become a legendary leader of various campaigns on behalf the world's poor and disadvantaged. What lies behind the success of the groups with celebrity support is the fact that such success can be achieved by any movement which is able to capture the public imagination. Timing Timing can also be very important as a well-supported pressure group putting pressure on the government in the run up to a general election might be hard for the competing political parties to resist. Sectional interests such as motorists or parents are, therefore, likely to receive more attention, simply because the government feels it is unable to ignore the interests of such a large group of society at that particular time (see previous note on pensioners). This is not always the case though, as shown in the 1980s when despite rising unemployment the trade unions, representing millions of workers, did not serve as effective pressure groups amidst appalling manufacturing decline. Liberty, however, has only 5,000 members but has successfully campaigned for the European Convention on Human Rights to be included in British law. ...read more.