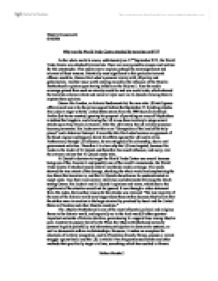 Why was the World Trade Centre attacked by terrorists on 9/11?

History Coursework 07/03/06 Why was the World Trade Centre attacked by terrorists on 9/11? As the whole world is aware, unfortunately on 11th September 9/11, the World Trade Centre was attacked by terrorists. There are many possible reasons and motives for this catastrophe. This essay aims to explore perhaps the most significant and relevant of these reasons. Potentially most significant in this particular terrorist offence would be, Osama Bin Laden's personal rivalry with US policy and globalisation. Another issue worth entering would be the influence of the Muslim Brotherhood's opinion upon having infidels on the Holy soil. Also the media coverage gained from such an atrocity would be and was world wide, which showed the terrorists extreme extent and meant all eyes were on Al-Quieda allowing them to express there opinions. ...read more.

Furthermore, through US influence, he was stripped of his citizenship, due to anti-government activities. Therefore it is clear why the US was targeted, because Bin Laden is the leader of Al Quieda and therefore has much influence, and sway, over the extreme actions that Al Quieda under take. Al Quieda's decision to target the World Trade Centre was crucial because being one of the America's and possibly one of the world's monuments, the World Trade Centre if attacked would achieve worldwide media coverage. The media showed the true extent of the damage, shocking the whole world and emphasising the true threat that terrorism is, and that Al Quieda should never be underestimated or swept aside. Also there were several interviews and statements following the attack stating Osama Bin Laden's and Al Quieda's opinions and views, which due to the significant of the situation would not be ignored. ...read more.

US, in which it has frequently used bombs and other methods that specifically target civilians; something which has resulted in Hamas being labeled a terrorist movement by goverments including the USA and the EU. The Brotherhood therefore were able to surrport Osama Bin Laden's plans, and then of coaurse gaining Bin Laden even more surrport from all the Muslim Brotherhood's followers. Which is potentially the reason why the "vast majority of the sons of the Islamic world" were in the favour of the attack. In conclusion I think that the key reaons for the World Trade Centre being terageted were due to; Osama Bin Ladens personal grudge against the US, the Muslim Brotherhood's exeption to violence in the Hamas, and the large amount of media that would be gained form such destruction to such a mighty monument. Nathan Marshall ...read more.