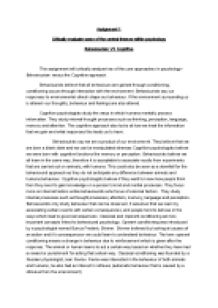 ﻿Assignment 1 Critically evaluate some of the central themes within psychology Behaviourism VS Cognitive This assignment will critically analyse two of the core approaches in psychology- Behaviourism versus the Cognitive approach. Behaviourists believe that all behaviours are gained through conditioning; conditioning occurs through interaction with the environment. Behaviourists say our responses to environmental stimuli shape our behaviour. If the environment surrounding us is altered- our thoughts, behaviour and feelings are also altered. Cognitive psychologists study the ways in which humans mentally process information. They study internal thought processes such as thinking, perception, language, memory and attention. The cognitive approach also looks at how we treat the information that we gain and what responses this leads us to have. Behaviourists say we are a product of our environment. They believe that we are born a blank slate and we can be manipulated whereas Cognitive psychologists believe we were born with cognitive functions like memory or perception. Behaviourists believe we all learn in the same way, therefore it is acceptable to associate results from experiments that are carried out on animals; with humans. This could also be seen as a downfall for the behaviourist approach as they do not anticipate any difference between animals and humans behaviour. Cognitive psychologists believe if they want to know how people think then they need to gain knowledge on a person?s mind and mental processes. ...read more.

This is what is known as systematic destination. Other little examples of classical conditioning in day to day life are things like associating a Friday night with eating a take away or eating popcorn whilst watching a film. The skinner box was used to investigate rewards and punishments on behaviour. Skinner identified three types of responses; neutral operants, reinforces and punishers. The Skinner box, also known as an operant conditioning chamber, was used to expose unconditioned and conditioned stimuli to animals. The Skinner box could be simply designed or more complex with different ways of monitoring and stimuli. The stimuli would include things such as food, coloured lights and response levers that monitor the animal?s behaviour. When Skinner tested classical conditioning on a bird, the bird would be learn to associate a red light with being fed. Eventually the bird would automatically associate the red light with food, therefore the bird would start to peck for the food upon just the sight of the red light. Skinners theory of Operant conditioning originates from the ideas of Edward Thorndike (1898). He created an experiment using a puzzle box, he placed a cat in this puzzle box and a piece of fish outside of the box to tease the cat and encourage the cat to try and escape. Thorndike timed how long it took the cat to escape and noted all the different routes in which the cat would try to escape so it could get to the food. ...read more.

was not legitimate as the experiment was too confusing for the child and was made difficult because the child had to match the dolls view with a photograph. Hughes decided to devise a more simple experiment which would be easier for the children to understand- the policeman doll study. The majority of the children were able to get the answers correct, therefore they proved they have lost their egocentric thinking and are fully able to picture things from other perspectives. This shows Piaget underestimated the children?s abilities. Overall the cognitive and behavioural approaches both try to explain human behaviour. Behaviourists focus on actions that can be observed externally and cognitive theories focus on internal states; how humans process information. Behavioural methods have had a lasting effect and are now used in therapeutic settings to help people learn new skills and behaviours i.e. overcoming addictions or phobias. Piaget?s work generated interest in the development of children and had a lasting impact on the future of education and development of children. Cognitive psychology has helped to explain many aspects of everyday behaviour and experience. It has answered the questions like why people forget things, why they experience visual illusions, and why eyewitness testimony is often inaccurate. Careers such as behavioural and cognitive therapists exist because of these approaches. Behavioural therapists will usually treat disorders such as phobias and obsessions and Cognitive therapists will usually treat emotional disorders, such as depression and will encourage the client to challenge and alter their thought processes to help with their disorder. ...read more.