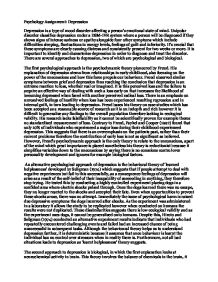 Depression. There are several approaches to depression, two of which are psychological and biological.

Psychology Assignment: Depression Depression is a type of mood disorder affecting a person's emotional state of mind. Unipolar disorder classifies depression under a DSM-IVR system where a person will be diagnosed if they shows signs of intense sadness or apathy alongside four other symptoms which include difficulties sleeping, fluctuations in energy levels, feelings of guilt and inferiority. It's crucial that these symptoms are clearly causing distress and consistently present for two weeks or more. It is important to identify and characterise depression in order to diagnose and treat the disorder. There are several approaches to depression, two of which are psychological and biological. The first psychological approach is the psychodynamic theory pioneered by Freud. His explanation of depression stems from relationships in early childhood, also focusing on the power of the unconscious and how this force propels our behaviour. Freud observed similar symptoms between grief and depression thus reaching the conclusion that depression is an extreme reaction to loss, whether real or imagined. It is this perceived loss and the failure to acquire an effective way of dealing with such a loss early on that increases the likelihood of becoming depressed when faced with another perceived radical loss. ...read more.

As the experiment was administered in a laboratory it allows the study to be replicated however when conducted on humans the results were not duplicated. These dissimilarities suggests there is low ecological validity and as the experiment uses dogs, it cannot be generalised onto humans. Despite this, Hiroto and Seligman (1974) conducted an alternative experiment results indicate that individuals who had repeatedly encountered challenging events and failed had an increased chance of being unsuccessful in subsequent tasks. Although the behavioural theory helps us to understand depression farther, it is deterministic because it assumes that once behaviour is learnt the individual has no control over stressors when in reality there is. Furthermore, not all bad situations leads to depression as 'learnt helplessness' theory suggests. The second approach to depression is biological, in which the first explanation looks at neurochemical activity in brain. This theory involves the balance of chemicals in the brain, it looks at the deficiency of neurotransmitters; noradrenanaline (NA) which is concerned with emotions and serotonin (5-HT) which regulates NA activity. The permissive amine hypothesis put forward by Kety (1975) suggests depression is caused by the fluctuation of NA causing mood swings due to insufficient levels of 5-HT. ...read more.

Supporting results were found by Allen (1976) where the concordance rate for MZ twins was 40 per cent and only 11 per cent for DZ twins. However, it is difficult to tell whether its purely genetic links influencing depression or if similar environment and upbringing have an effect on the occurrence of the disorder. In 1986, Wender et al carried out adoption studies, separating genes and the environment by looking at the biological relatives of adopted depressive patients and found that a higher incidence rate compared to those in the control group indicating that the role of genes play a large part in depression. This can helps sufferers as it removes the 'blame' culture from them onto others, namely relatives. Although higher rates of depression within genetically tied groups are expected to assure justification of the theory, the genetic explantation of depression far exceeds the psychodynamic, behavioural and neurochemical theories as its evidence clearly demonstrate a direct connection between genes and the disorder, basing it on well-established scientific disciplines which can be reliably measured. It also takes into account how environmental factors may induce the depression and separate these whereas all other theories are oversimplistic by reducing the cause of depression down to either the unconcious, learnt behaviour or neurotransmitters and ignoring all other influences. ...read more.

The writer has included quite a lot of information about depression and has quoted many referenced studies and authors. The writer also appears to understand the two approaches to depression. The score could now be improved if the writer takes on board the comments made and includes some writing about the 'cognitive' approach as well as the 'hormonal' aspects of depression.